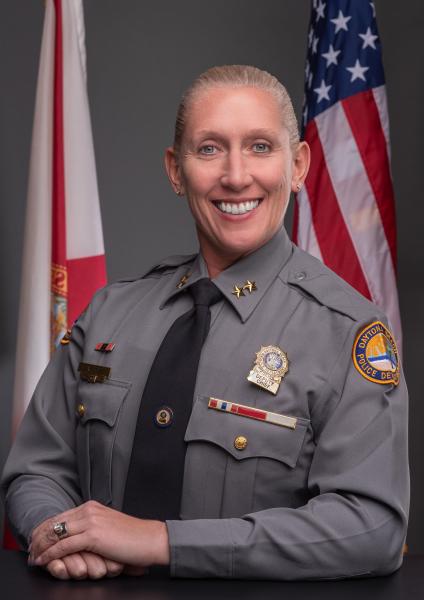 Northern Michigan University alumna Jennifer Whittet (BS '98) has become the first woman to hold the rank of deputy chief in the Daytona Beach Police Department. She is also only the second woman to reach that rank in the Seventh Judicial Circuit that includes four counties.

“Two groundbreaking things happened here at once,” said Whittet during a recent phone interview. “The current police chief is the first Black male to hold that position here and, when he moved up to that from deputy chief, the conversation started that I was a captain and in a good position to take over as deputy chief.

"He will say my gender had nothing to do with it, and that he didn't make the decision with the intent of making history. I appreciate because I wasn't trying to make history, either. It's exciting to be promoted to the position, but it's not really any different. I'm still just doing my assigned job.”

Since starting her career with DBPD in 2001, Whittet has worked in various capacities, including the patrol division, special investigation unit, Florida Department of Law Enforcement Task Force, crisis intervention team and the office of professional standards. There are two deputy chiefs in the department: one who oversees operations; and Whittet, who supervises support.

“We support what uniformed officers do. That includes all of the detectives, training, school resource officers and records and evidence. It adds more to the plate because, as a captain, I was responsible for detectives only. Recruiting new officers is another area I oversee, and that is more challenging these days. Not as many are considering careers in law enforcement. I'm not sure if it's related to what's going on in the world or the pandemic. The numbers are down at the police academy run by a college in Daytona Beach, so there's a smaller pool to draw from locally.

“I truly love my job and work hard to make sure every life I affect is done with compassion and understanding. You don't realize how many lives are touched by law enforcement action, whether you're helping a grieving family or putting someone in jail. But when you put someone in jail, you can do it respectfully, understanding that they have family. I also affect officers' lives because internal investigations come through me. When I started, I didn't see that it's so much bigger than me. That's what I try to impress upon new staff members.”

Whittet has received numerous awards, including a Medal of Valor for her response to a tragic accident. Two teenagers had stolen a vehicle and were speeding through the streets of Daytona Beach when the car flipped and hit a building. Whittet and another officer pulled the teens from the flaming car and administered CPR, but they died from their serious injuries.

She previously worked a few years for the Vilas County Sheriff's Department in Wisconsin, whose jurisdiction includes her hometown of Eagle River. She was the second female deputy every hired there, and she recalls a male field training officer once telling her, “You'll never make it.”

But she did, and it was the promise of that job that led Whittet to pursue a bachelor's degree in criminal justice with a minor in psychology from NMU.

After completing a police academy at Fox Valley Technical College in Appleton, Whittet had applied for a part-time position with Vilas County. She didn't get the job, but the sheriff told her that if she finished a four-year degree, he would hire her full time when she was done.

“That motivated me to work hard and do well,” said Whittet, who had originally considered sports medicine when she started college on a track scholarship at the University of Wisconsin-Oshkosh “I went to NMU and stayed there to get a degree and a job. The tech college gave me the hands-on skills. I understood how to do certain tactics. The four-year degree helped me understand society and people instead of the technical things.

"It gave me more of an overall view of the system, people in general and why people do the things they do. I'm glad I found your school, went there and graduated from there. People down here in Florida know about Northern Michigan University.”

Whittet also holds a master's degree in criminal justice from Columbia College.  She is a graduate of the Police Executive Research Forum's (PERF) Senior Management Institute for Police, the Southern Police Institute and the FBI Florida Executive Development Seminar. She holds memberships in the International Association of Chiefs of Police and the PERF.