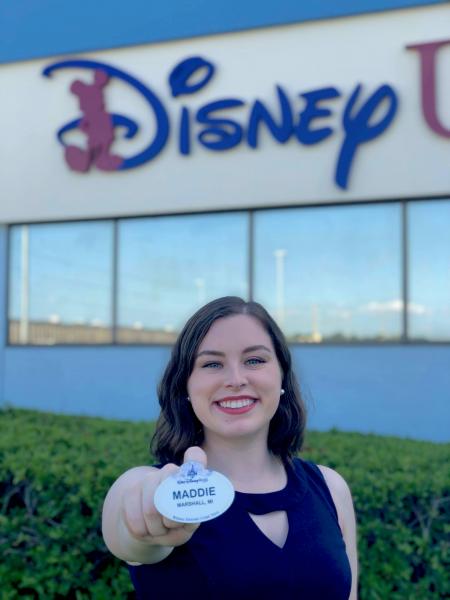 Applying her years of experience in musical theater and dance, along with her participation in the Disney College Program, Northern Michigan University alumna Maddie Rayner ('19 BS) now works as a character performer at Walt Disney World in Orlando.

Rayner decided to apply for the Disney College Program (DCP) during her freshman year at NMU after learning about it from a close friend. After enduring an audition process that involved an online application, web-based and phone interviews and an in-person audition in Chicago, she was accepted into DCP and hired to work as an entertainer during her fall 2016 semester while continuing her college studies.

“NMU prepared me for my experience working at Disney World first and foremost by supporting my desire to participate in the Disney College Program my sophomore year,” said the Marshall, Mich. native. “My professors, advisers and the financial aid staff helped me structure my class schedule and figure out how to work the college program into my path to graduation, while maintaining my academic scholarships. NMU allowed me the flexibility and opportunity to do the DCP, which got my foot in the door for the full-time position I have now.”

Rayner earned her bachelor's degree in speech, language and hearing sciences at NMU while also pursuing a minor in theater and entertainment arts. She attributes her success in the DCP audition process to her background in both musical theater and dance, including NMU productions.

“Storytelling is the heart of the Walt Disney Company, and therefore a very integral piece of their audition process,” said Rayner. “Theater made me more confident to make bold choices and to be okay with making a fool out of myself, and that was the majority of my audition. In addition, having a dance background was extremely helpful in the audition process. Knowing dance terminology, being flexible and having a sense of musicality beyond just the steps are all good tools to have.”

During her senior year at NMU, Rayner began to contemplate post-graduation plans and decided to re-audition for Walt Disney World.

“I was in the entertainment sector on my Disney College Program, so going into my full-time audition, I already knew how they would run auditions and what would be expected of me,” said Rayner. “I also had four months of performing for Disney under my belt, so it gave me a big advantage for my application having the college program on my résumé.”

Rayner auditioned in Orlando in January. She found out she secured the job via phone call following a matinee performance of Beauty and the Beast at NMU. She moved to Orlando in May and has been friends with a variety of Disney characters ever since, including Minnie Mouse, Daisy Duck, Piglet, Olaf and Vanellope von Schweetz.

“Disney has something called ‘character integrity,' which means that the characters are addressed as and treated as their own people,” said Rayner. “I am not ‘costumed as characters,' I am ‘friends with characters.'”

When asked what the best part of her job is, she claims that it is the ability to make people happy.

“I meet hundreds of people each day, and every person here is celebrating for a different reason: spending time with family, graduating high school, getting engaged, announcing a pregnancy, losing 180 pounds, great-grandma's 100th birthday, 50th wedding anniversary, beating cancer, or a 4-year-old's Make-A-Wish trip,” said Rayner. “You may never know what a person is going through, but for some crazy, incredible reason, people love the characters so much that they invite them into their lives to celebrate. I get to make people happy, and there is no greater gift than being the reason someone smiles; I make real magic.”

At NMU, Rayner was a member of the national theater honor society Alpha Psi Omega and is a graduate of the Student Leader Fellowship Program.