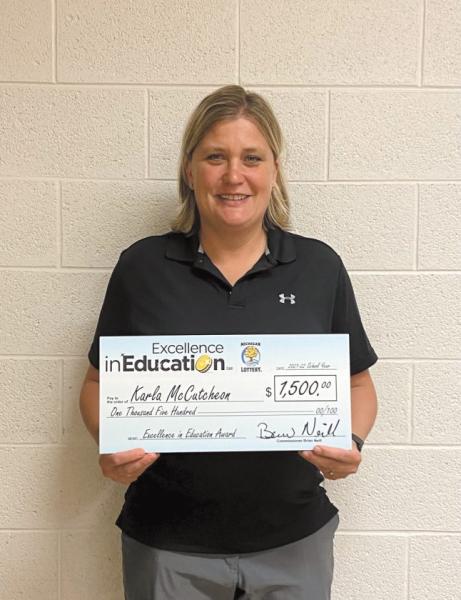 NMU alumna and former Wildcat basketball player Karla (Strand) McCutcheon was recently honored with an Excellence in Education award from the Michigan Lottery.  She has taught physical education and health at Marquette Senior High School for 21 years.

McCutcheon graduated in 2000 from Northern with a bachelor's degree in physical education/secondary eduction and a minor in health education/secondary education. She was a member of the 1997-98 women's basketball team inducted into the NMU Sports Hall of Fame. The squad advanced to the NCAA II Semifinals after double-digit victories in each of the first three rounds. The Wildcats outscored their opponents 2,471 to 1,890 en route to a GLIAC Tournament Championship.

“I chose education because of the positive impact my teachers had on my K-12 experience,” McCutcheon said in a news release. “The teens I get to see and work with every day do much more than keep me going, they make me feel alive.

“There are so many days where my students amaze me. Interacting with them and seeing them grow over the years is such a privilege for me. There have been many times I have been moved to tears because of how amazing and remarkable my students are.”

A colleague nominated McCutcheon for the award. The nomination cited her passion for physical education and her focus on ensuring that all students feel included.

“Aside from the required PE course, she has developed a weightlifting class, as well as Advanced PE where students who are more competitive can play," the nomination read. "In addition to the competitive students, she will cater her classes and activities to include our students who have major learning disabilities or have been diagnosed with autism or other related disorders, She also runs our advisory program for the entire building where she develops schoolwide activities to foster a relationship between the students and the teacher.

“Karla is the go-to person for many activities such as homecoming, helping administrators and mentoring many new teachers. She is an advocate for the students, and they know she truly cares about their well-being. There are many great teachers in the state, but Karla is one that if she isn't there, our entire school climate would change.”

The Michigan Lottery established the Excellence in Education awards in 2014 to recognize outstanding public-school educators across the state during the school year.

Winners of the weekly award receive a plaque, a $1,500 cash prize and a $500 grant to their classroom, school or school district, the Michigan Lottery said. One of the weekly winners will be selected as the Educator of the Year and will receive a $10,000 cash prize.

Each winner also is featured in a news segment on the Lottery's media partner stations: WXYZ-TV in Detroit, FOX 17 in Grand Rapids, FOX 47 in Lansing and WNEM-TV in Saginaw.

Since it began in 1972, the Michigan Lottery has contributed more than $24.5 billion to support public education in the state, the release stated.