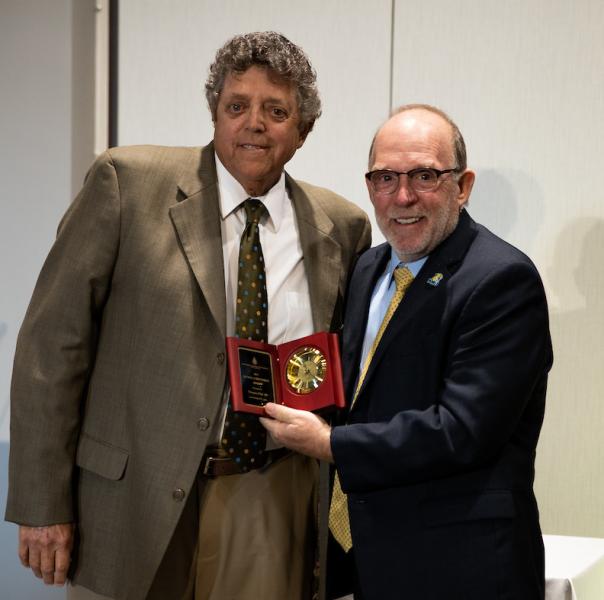 Tom Fish said a realtor once told him “there's a buyer for every house.” Those words resonated with the 1969 Northern Michigan University graduate throughout his personal life and lengthy career working with people with intellectual and developmental disabilities.

Fish recently retired and lives in Wilmington, N.C., but his extensive accomplishments in the field earned him NMU's Alumni Achievement Award.

“Those words certainly applied to how I got to NMU because, when I was applying to colleges, there weren't many buyers for this house,” he said, pointing to himself. “I wasn't a commodity that a lot of places wanted. Northern was a world apart from the Chicago suburbs, where I grew up, but I immediately felt accepted and valued. There was a genuineness about being here that just took to me right away. This award means everything to me. This place means everything to me. I will continue to love NMU for as long as I live.”

While enrolled at NMU, Fish immersed himself in campus activities. He was active in student government, served as a residence hall adviser and was founding president of the NMU chapter of Circle K, an international collegiate organization dedicated to community service and leadership development. He graduated with a degree in elementary education.

“After student teaching in Escanaba in an elementary classroom, I realized I wasn't cut out to be a teacher,” he said. “I just couldn't be in the classroom all day. So I went to Boston and got a degree in social work. People said I wasn't suited for it and wouldn't make it. I didn't listen.”

Fish also earned a doctorate in rehabilitation counseling from Ohio State University. He spent eight years in the mental health field in Boston and Phoenix before beginning a 39-year career at OSU's Nisonger Center, where he could “paint his own picture” and develop programs for people with intellectual and developmental disabilities and their families. He also taught, supervised students and conducted research.

Fish wrote three books and several journal articles, and received more than $3 million in external grants and contracts. He is a nationally recognized authority on sibling relationships, having developed information and support programs in Ohio and across the country.

One of Fish's proudest achievements was establishing the Next Chapter Book Club, the largest community-based reading program for adults with intellectual and developmental disabilities in the world. He also was co-founder of the largest and longest-standing program serving young adults with high-functioning autism and their families.

Fish was honored previously with the 2018 Community Hero Award from the Columbus Dispatch newspaper for his commitment to community service, the 2017 National Service Award from the American Association on Intellectual and Developmental Disabilities and the 1999 Mary Switzer Fellowship from the National Institute on Disability and Rehabilitation.

He has served on the boards of the Down Syndrome Associations of Central Ohio and Eastern North Carolina, United Cerebral Palsy of Columbus, Ohio SIBS, the National Sibling Leadership Network, Community Kitchen and ARC Industries.

At the NMU alumni awards brunch, Fish shared a story about a 26-year-old man who exhibited spitting behaviors.

“Everyone working with him thought they couldn't find him a job because he was spitting all the time. They decided they were going to try to eradicate the behaviors. For six months, they worked diligently and there was no more spitting. They found him a job at a trucking company loading and unloading trucks on the dock, where one of the most frequent behaviors was spitting. All that effort and energy to change guy and make him something that he wasn't, when all they needed was to find the right buyer for him. You just need to value people, help them get connected, then stand away and let them be themselves.”