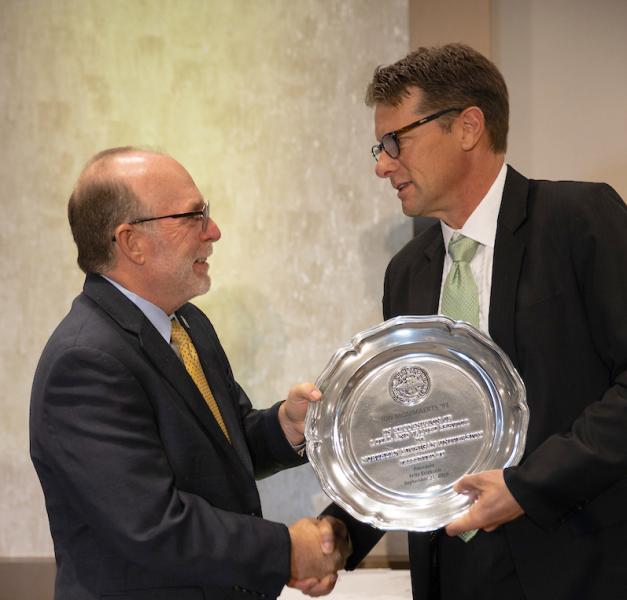 Northern Michigan University alumnus Jon Mommaerts of Marquette said “it was outside of the classroom where I learned everything that made me who I am today.” It seems an appropriate sentiment from someone who has enhanced the area's outdoor silent sports culture by helping to establish a renowned trail network and world-class skiing and biking events.

His efforts earned him NMU's Alumni Service Award, which was presented over Homecoming weekend.

“This is really a community award; I'm just the representative for hundreds of people who've done a massive amount of work on these things for many, many years,” said Mommaerts at the awards brunch.

The former walk-on member of the Wildcat Nordic ski team co-founded the Noquemanon Ski Marathon and serves as chief of course. Mommaerts said he started what has evolved into one of America's premier Nordic events because he had grown weary of having to travel overseas for competitions.

“I wanted to have a ski marathon in town,” he said. “We have the best snow, the best environment, and it's at sea level, so why not have one here?”

The race's success led Mommaerts and others to create the Noquemanon Trail Network (NTN), which features more than 100 miles of world-class, multi-use trails. NMU and the NTN launched a partnership in January 2018 that gives students complimentary access to the NTN and free equipment rentals. Northern also constructed an NTN trailhead in the heart of campus.

Mommaerts helped to formulate what is now the Ore-to-Shore Mountain Bike Epic, served on the U.S. Olympic Ski Hall of Fame Board and created the Superiorland cross-country ski club for younger children. He continues to promote the NMU Nordic ski team, which held a 50th anniversary reunion over Homecoming, and said his participation in the sport under coach Sten Fjeldheim was highly impactful.

“That was the beginning of me learning about personal accountability, discipline and work ethic. It was never easy with Sten. He always made you do it on your own and take care of yourself. He didn't give us anything; he made us earn it.”

Before graduating in 1991 with a bachelor's degree in finance, Mommaerts was selected for a Washington Center internship in the nation's capital. He went on to study at George Washington University and the American College to complete his financial planning curriculum.

“I thought I wanted to be a stockbroker and live in a big city, but I hated both of those things. So I quit everything and came back to Marquette. I said, ‘I'm just going to figure it out. I want to stay here and I want this place to be great; I just need to find a job.' Here we are.”

He co-founded Mommaerts Mahaney Financial Services Inc. and was one of the first practicing Certified Financial Planner licensees in the Upper Peninsula. Mommaerts also serves on a number of boards for nonprofit and profit organizations.