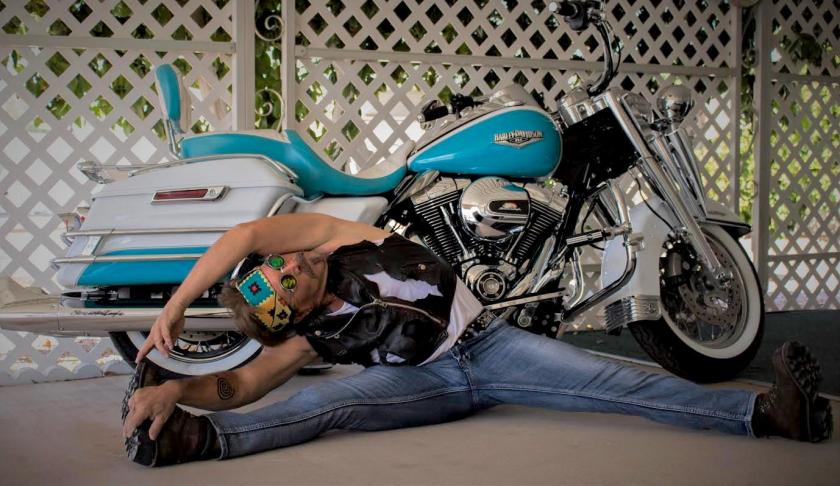 Ormson with his Harley (photo by Randy Anagnostis)

After falling from a roof and injuring his back, NMU alumnus Greg Ormson ('99 MA) found that yoga delivered both pain relief and a new vocation. He became a certified instructor in the practice, just as he had with another avid interest: motorcycling. Ormson has found a unique way to blend both passions. He leads “Yoga and Leather: Yoga for Bikers,” the first—and, to his knowledge, only—specialized class of its kind in the nation to be held in a Harley-Davidson dealership.

It may not seem a logical pairing, but to H.O.G. (Harley Owners Group) member Ormson, the two effectively complement each other and share some similarities. He said beginners in either activity benefit from the guidance of a qualified trainer.

“With motorcycle instruction, the emphasis is on developing riding skills and environmental awareness,” said Ormson, also known as Motorcycling Yogi G. “But spending several hours in the saddle and handling unexpected situations that may arise requires mental focus, strength, flexibility and stamina. That's where yoga comes in. It is increasingly viewed as the ideal exercise to improve overall mind-body performance.

“When riders are faced with executing a challenging move like a tight U-turn on a heavy bike, breathing shallows and the body tenses, affecting performance. Yoga training can lower stress levels through controlled breathing and meditation. The stretching and strengthening poses reduce the risk of injury by keeping the joints and muscles bikers rely on—hips, back, neck, shoulders, elbows and wrists—flexible and strong.”

Ormson added that yoga improves posture and reduces the recovery time after a demanding ride. It also enhances safety by promoting better sleep, which aids attentiveness on the road.

If the COVID-19 crisis improves, Ormson is scheduled to embark on his fourth year of “Yoga and Leather” this fall at Superstition Harley-Davidson in Apache Junction, Ariz. He first pitched the idea to events coordinator Brina Brown, citing the safety, therapeutic and practical benefits. Brown had done yoga and received the general manager's authorization to move forward with the class.

The first session attracted a small turnout, with some participants showing up in riders' attire of blue jeans, black boots and matching leather jackets. Ormson said most would not have attended a typical studio. The shared focus on better biking and the location, with Harleys and gear directly below, made yoga seem more accessible and welcoming. His “community,” as he collectively refers to those who attend Yoga and Leather, has grown.

Weekly sessions are held during the cooler months of October-April in the Eagle's Nest, an outdoor space on the second floor of the dealership, facing the Goldfield Mountains. It's an unusual context, with no dimmed lights and temperatures that vary with the sun. Ormson works on breathing for 15 minutes, then moves into the asana—or movement—phase, practicing six or seven poses. The class ends with a resting period.

“When they're chilling on their mats after the yoga experience, I'll play my sitar and guitar,” said Ormson, who learned the former stringed instrument during a trip to India. “At the same time, the sales staff fires up 75 motorcycles that had been lined up on display around the building and wheels them back inside for the night. That rumbling would freak out some people, but those in my class groove on that sound. It's the only place in the country you will hear the ping of a sitar drowned out by the roar of the opening of the throat from the big twins below.”

Ormson also leads a monthly stretch ride to a natural setting. Participants breathe and meditate for 20 minutes before he shows how to use a motorcycle as a prop for stretches that incorporate asana therapies. On a recent trip to visit family in Marquette, he demonstrated a few stretches during a safe social distance interview at the Presque Isle Pavilion.

At about the time he graduated from Northern, Ormson fell while shoveling snow from the roof of a house on County Road 550. The incident did not prevent him from accepting an instructor position at North Central Technical College in Wausau, Wis., where he taught writing and public speaking.

After retiring and relocating to Hawaii, the lingering back injury intensified. Ormson recalled being sprawled out on the floor in pain, unable to help his partner set up a television stand. He saw many buildings draped with banners advertising yoga and signed up for a session.

“I was pain-free within a month,” Ormson said. “It made me a firm believer and I decided to become a certified yoga coach. Around the same time, I had completed training to become a certified Motorcycle Safety Foundation RiderCoach for Hawaii. In teaching U-turns on the figure-eight track hundreds of times, I noticed some people held their breath and tensed up when practicing the maneuver.”

Ormson had to complete a difficult U-turn on his large motorcycle when he made a wrong turn and was coming to a dead end just as a school was letting out. It was a chaotic situation on a narrow road sandwiched by sharp lava rocks and filled with obstacles.

“Both yoga practice and private instruction in free diving in Hawaii had taught me the value of controlled breathing and meditation,” he said. “I applied those techniques to the situation and executed the turn easily by putting my body at ease in the midst of stress. That's when I first got the idea to combine the two, which ultimately led to Yoga and Leather after I moved to Arizona.”

According to Ormson, the ratio of women to men practicing yoga in the United States is about 80/20, while motorcycling is the reverse, dominated by men. But he said the demographic of both activities is shifting and the margins narrowing, which bodes well for future attendance at his classes.

Ormson has applied his NMU master's degree in writing as a frequent contributor to international yoga magazines, journals and websites. In 2017, he won the Lyric Narrative Nonfiction Award from the Easter Iowa Review for “Midwest Intimations,” and in 2016, he won Indiana Review's contest for 13-word stories. His nonfiction has earned finalist mentions in New Millennium and The Bellingham Review.

Ormson worked in NMU's Marketing and Communications Office while enrolled in graduate school. Both of his daughters, Ashley Prinsen and Briana Ormson, also earned undergraduate degrees from Northern. Briana is continuing her NMU education in pursuit of a master's degree. 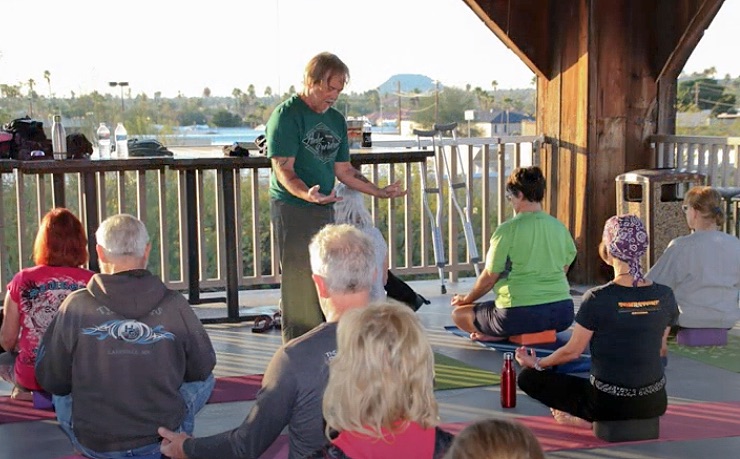 Ormson leading a past class (photo by Randy Anagnostis) 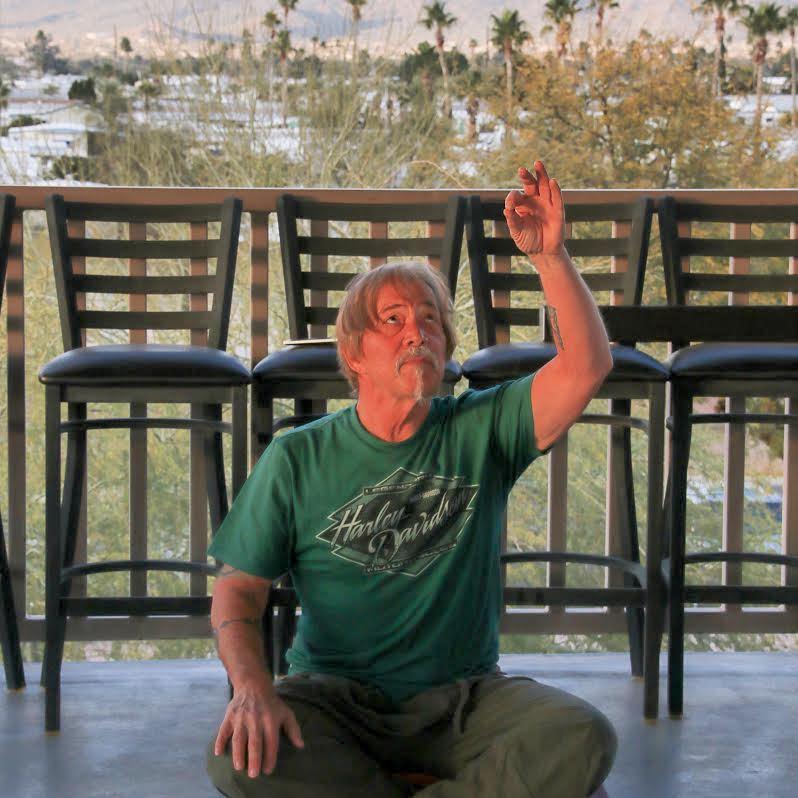 Ormson striking a pose in the sun's glow
Prepared By