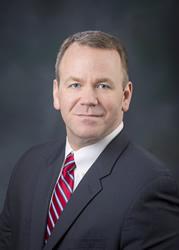 NMU alumnus Brom Stibitz ('05 MPA) was recently appointed by Gov. Gretchen Whitmer as director of the Michigan Department of Technology, Management and Budget (DTMB), after serving as acting director since March. He is also the state's chief information officer, managing all aspects of cybersecurity and information technology across state government.

“DTMB is the backbone of state government,” said Whitmer in a press release from the governor's office. “Brom has done an incredible job ensuring our 48,464 state employees have the right tools and technology they need to keep serving the people of Michigan as we battle a global pandemic. He's the right person to lead this crucial department during these difficult times, and I'm proud to have Brom serving in my cabinet.”

He had served as the chief deputy director of DTMB since 2015, where he has been head of operations for the agency of nearly 3,000 employees, providing information technology, business and administrative services to Michigan's residents, state agencies and state employees.

“Serving the people of Michigan has always been an honor,” said Stibitz. “These have been challenging times, no doubt about it, but I am so proud of the way our team has gone above and beyond to ensure state government doesn't miss a beat. I look forward to continuing to serve in Governor Whitmer's administration as we work to build a stronger Michigan for all of us.”

During his tenure at DTMB, Stibitz has been instrumental in improving IT governance, enhancing the state's approach to IT security and increasing overall customer satisfaction scores for DTMB. Prior to his role at DTMB, Stibitz served in leadership roles at the Michigan Department of Treasury and the Michigan Legislature.

Stibitz holds a master's degree in public administration from NMU and a bachelor's degree in biology from Kalamazoo College.