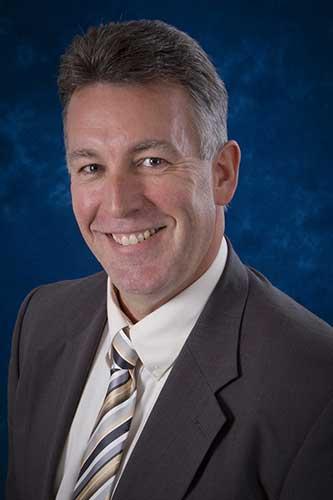 NMU management alumnus Brent Madalinski ('91 BS) was recently named a recipient of the Outstanding Educator Award from Bay College in Escanaba, where he serves as a full-time business instructor. The award recognizes commitment to education and excellence in service to others. Recipients are nominated by colleagues, students or community members.

According to a press release, Madalinski has been employed at Bay College since December 2000. He was originally hired as a business consultant and business trainer in the Workforce Development Department. He worked with 35 businesses in Delta, Dickinson, Houghton, Marquette and Menominee Counties to deliver training in a variety of soft skills areas. Madalinski was also an account manager and then became the director of Workforce Development. He also served as an adjunct instructor prior to becoming a full-time instructor in fall 2007.

“When you think of Bay College business courses, you no doubt think of Brent Madalinski," said Cindy Carter, dean of Business, Technology and Workforce Development, in the press release. "Brent is a pillar within our Business Division and brings creativity, passion and energy to his classrooms.  He cares deeply about each and every student's success and spends countless hours prepping for his courses, serving on numerous college committees, advising students and serving as club adviser for Business Professionals of America."

Before working at Bay College, Madalinski was a business manager for United Parcel Service (UPS) for 14 years. He managed five UPS facilities in Michigan. In addition to his NMU degree, he holds a master's in general administration from Central Michigan University.

Madalinski was previously named Outstanding Educator for Bay College in 2012 and 2016.  He also received the PRIDE Award in February 2005 and the TORCH Award in November 2016.

Visit baycollege.edu/bayawards to watch a short video of Carter presenting the Outstanding Educator Award to Madalinski, along with his acceptance speech.