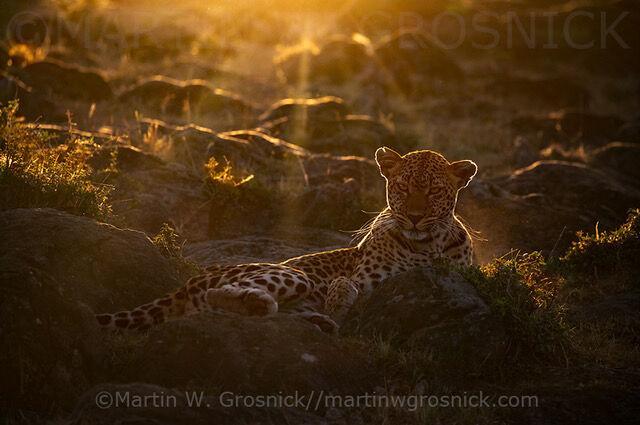 Winning photo of a leopard outlined by a sunrise backdrop

NMU alumnus Martin W. Grosnick (BS '68, MA '76) recently won the grand prize in the Pangolin Photo Safari Wildlife Photographer of the Year contest. His winning image, selected from 1,000 entries, shows a leopard basking in the subtle rays of sunrise on Kenya's Masai Mara. The Copper Harbor native's first serious foray into wildlife photography occurred at Isle Royale National Park. He served as the park's postmaster over four summers after high school and honed his camera skills in his spare time.

Grosnick's grand prize—an 11-day Botswana photo safari—is the latest achievement in a distinguished career spanning four decades. His images have appeared on calendars and in most major wildlife and nature-oriented magazines, including Alaska and Audubon, as well as books published by the National Geographic Society, National Wildlife Foundation and Reader's Digest.

It was an earlier prize that Grosnick “blames” for sparking his passion for photography. He won a plastic Ansco 620 camera by selling the most subscriptions to Farm Journal magazine during a fifth-grade fundraiser.

“Perhaps the frustration of trying to capture a decent black-and-white image with such a camera at such an early age led me on this odyssey to capture the perfect image using the best equipment,” he said.

Grosnick's family used to operate the Isle Royale Queen, which ferried passengers to and from the national park. He began to train his lens on the island's moose, wolves and other wildlife during down time from his summer postmaster duty and worked to refine his technique. Grosnick said his NMU biology courses provided a better understanding of the natural world and the animals he sought to capture on camera.

“For better images, the goal is always to anticipate the animal's behavior and actions, not merely to follow,” said Grosnick, a self-taught photographer. “And that only comes from experience and lots of time spent in the field. I have to stress proper planning to help ensure success—knowing your anticipated animals, their habitats and their annual migration routes; selecting the proper season for what you hope to find; and getting the timing and ‘nuts and bolts' logistics just right.

“Probably the best advice I can give to aspiring wildlife photographers is ‘f8 and be there.' You need to be in the field—not necessarily in exotic locations—to capture images and then learn in the process. You won't find that in a classroom.”

After earning his NMU degrees, Grosnick worked for many years at Denali National Park in Alaska, which draws many wildlife photographers. His job there with the National Park Service included roles as caribou researcher, park technician and in road maintenance, all of which kept him close to nature.

Grosnick still lives just outside the park, but frequently travels to various international locales to extend his quest for memorable images. He began with the marvels of East Africa, on the Masai Mara and Serengeti Plains. Then he traveled to Southern Africa, where his viewfinder revealed contrasts between Namibia's stark deserts and the Bushveld subtropical woodland region. Grosnick has also visited the Falklands and South Georgia Island, the Antarctic Peninsula and Svalbard, Norway.

“Lately, in addition to Africa, I've sort of made a full circle of my interests and started photographing in Iceland. I guess I'm enjoying subjects that are more static, inviting my mind to find different compositions, backgrounds and special effects. This is a departure from wildlife photography, where access and movement is usually limited, and the action can be over in seconds.”

Grosnick said he has been on at least 15 African safaris since his first in 1980. He is “impatiently waiting” for the COVID-19 pandemic to subside so Botswana can reopen its borders and he can participate in the grand prize photo safari along the Chobe River and the Okavango Delta.