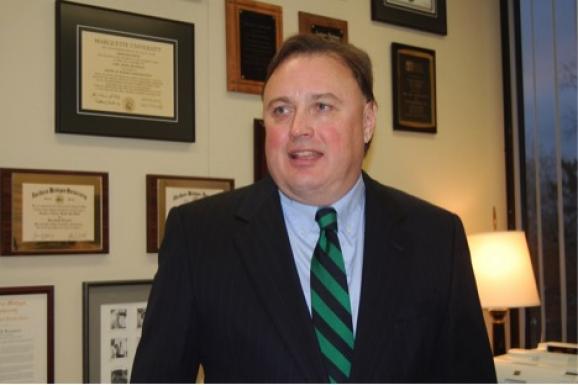 Northern Michigan University Marketing Professor Gary Brunswick has been selected as the Dec. 15 commencement speaker through a nomination process overseen by the ASNMU student government organization.

Brunswick said he was initially surprised that students selected him to be the commencement speaker, but is honored to accept the invitation.

“I would hope that as students leave NMU and enter the workforce, they come to realize the high quality of the education they received while at NMU, as well as the richness of the experiences they accumulated while being here,” Brunswick said. “NMU is a special place for a variety of reasons, including the unique faculty, staff, students and the university's location here in the Upper Peninsula. Earning a degree from NMU is truly a mark of distinction in a number of different and meaningful ways."

Brunswick has been a full-time faculty member at NMU since 1991. He served as the director of business affairs for the College of Business from 1997 to 2005. Brunswick has received the following NMU awards: Distinguished Faculty (2005), Excellence in Teaching (2018), and MBA Program Professor of the Year (2013), College of Business Graduate Faculty (2016), among others.

ASNMU President Cody Mayer said Brunswick was selected as commencement speaker after he was nominated by several students who gave compelling narratives about how much he has impacted their time at Northern and helped them find career paths.

This is the third year that graduating students have nominated faculty members to speak at December commencement. Mayer said this has been part of a greater push for student input in the selection process.

“ASNMU now plays a much more vital role within this process,” Mayer said. “We never used to select a faculty member, now it’s ASNMU’s job to get all those ‘ducks in a row.’ The ASNMU President is responsible for making the committee charge, getting the committee together and handling the nominations from students.”

The December 2018 graduation ceremony will be held at 10:30 a.m. Saturday, Dec. 15 in the Superior Dome. It will be televised on WNMU-TV 13 and streamed online at nmu.edu/commencement.