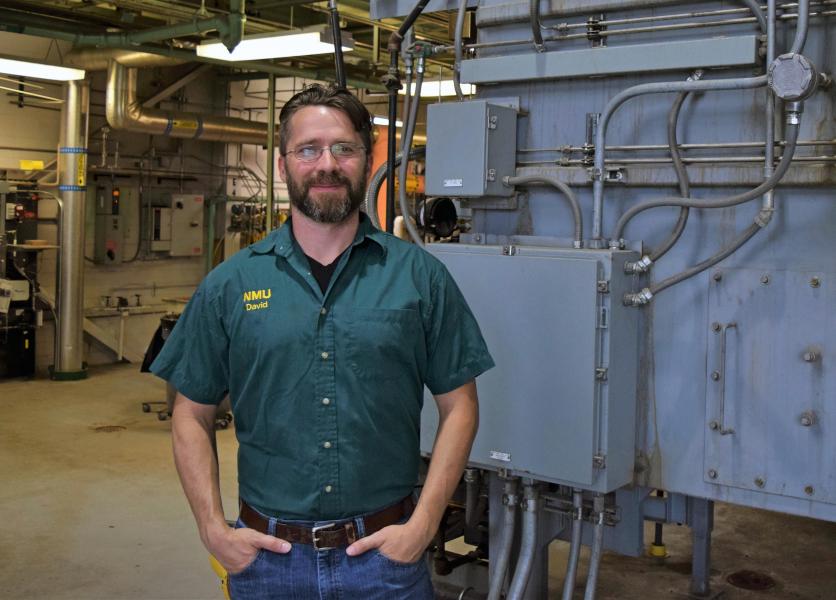 “I wasn't fully sure what I wanted to do for a career when I was younger,” said Dahlstrom. “I wound up serving in plant operations or related positions while trying to figure that out. I liked that line of work, so I carried through with it.

Dahlstrom is no stranger to the U.P., as he grew up in Negaunee. Wanting to return to his roots with his family after working in lower Michigan, Dahstrom applied for an opening at NMU. Fast forward eight years later and he is still a member of the NMU plant operations team.

Dahlstrom said that the primary function of his job is to provide heat for all the buildings on campus and to provide steam to run the air-conditioning units. His department also supplies some electricity via a small steam turbine.

“Someone is at the plant 24/7,” he said. “If public safety finds an issue, they call us to report it and we handle it by contacting the right person, whether it be the HVAC guys, plumbers or someone else.”

A typical work day for Dahlstrom entails preventative maintenance. He said that this includes making sure equipment and controls are clean and operating properly.

“We are always waiting for something to go wrong so that we can jump on it and fix it. In that sense, we are kind of the opposite of a firefighter. If the fire in the boiler isn't burning, that's when we're running around.”

Dahstrom is currently pursuing a higher-level boiler license than the one he currently possesses. When asked why he is doing this, his answer was simple and applaudable: “Just because. I might as well do the best I can for the field I am in.”

Upon graduating from Negaunee High School, Dahlstrom began his career by joining the Navy for four years. Perhaps by fate, he served his first plant operations role there.

“While in the Navy, I was basically a mechanic and operator at the bottom of a ship. Those were some long hours, and it was hot and noisy. But, I had a lot of great friends there and truly did enjoy it.”

Prior to his position at NMU, Dalstrom worked for eight years at Gerber Baby Food through its boiler operator apprenticeship program. During that time, he also obtained his journeyman's card. A journeyman is a person who has completed both an apprenticeship program and required vocational studies, and has passed an exam to be eligible for certification.

Outside of work, Dahstrom enjoys spending time with his wife and four children. He also said that he likes hiking, fitness and practicing his Christian faith, which “fuels” his “joy and purpose.”

Dahstrom said that he loves swimming and that he spends a fair portion of his summer at both Teal Lake in Negaunee and along the shore of Lake Superior. He has even made his way to the Great Barrier Reef for a snorkeling adventure.

“I am heavily involved in whatever my kids are doing. My eldest son is 15 and is my lifting partner. We share a love for fitness. My biggest motivator in life is my wife Elizabeth. She encourages me to stay driven and keep working hard.”

When asked who his role model is, Dahstrom's response was unconventional: “My role model is not a certain person but rather a type of person. My role models are people who are sincere, honest and hard-working, whether that hard work be most apparent in one's hobbies, career or family.”

If Dahlstrom's role model suggests anything about his character, it is clear that he is a positive, impactful member of the NMU community whose passion for his line of work helps keep campus safe and comfortable.

This story was prepared by Jill Vermeulen, a former student writer in NMU Marketing and Communications.