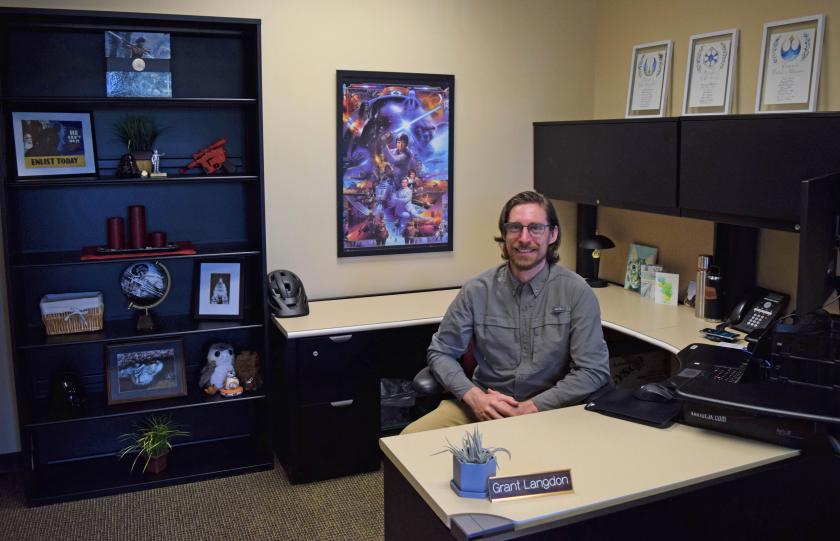 Langdon in his Career Services office

When stepping into Grant Langdon's office at Northern Michigan University, a classy array of Star Wars paraphernalia greets you. One cannot help but notice the welcoming environment Langdon establishes through this aesthetic display of his own personal interests, not to mention the warm smile he often bears whenever spotted on campus.

Langdon's NMU ties began during his undergraduate years. Upon earning his bachelor's degree in outdoor recreation leadership and management, he spent 10 years as a resident director. In fall 2020, he assumed his current position as assistant director of Career Services.

“As a resident director, being able to help students when they needed it made me feel like I was able to make a difference in their lives. A conversation I had a few years ago with Director of Career Services Katie Korpi led me to see that Career Services provides a similar type of impact with students. I realized that it was a department I was interested in working in after I was done living where I also worked.”

Langdon said that the primary goal of his position is to help students pursue and attain a career that they want, “something that they will be interested in and passionate about.” He said his two goals are to implement new technologies that will guide students in resume creation, interview etiquette and practice; and start an alumni mentor program for students to have a mentor in a career similar to their interest.

“The best part is the resume reviews. Based on what the student is applying for, we look deeper into their experiences and make connections between what the student has done and what they are going to do. They leave feeling competent and empowered, knowing they are capable. Their resume reflects that, specifically in what they're applying to do. I always feel amazing helping students see how awesome they really are.”

Langdon said that during his time at Northern he is most proud to have been involved in the launch of a brand new residence hall. Maple Hall opened its doors to students in 2018.

“It was an honor to be the first resident director with the first resident adviser staff there. Building a community is a big responsibility that impacts hundreds upon hundreds of students who live there. That culture stays, even after I am gone. We won homecoming competitions, House of the Year awards and more. I feel really proud of the staff and students for making that all happen.”

In addition to work responsibilities, Langdon is in his final year of the higher education and student affairs master's degree program at NMU. Outside of the office and his studies, he finds respite while playing video games with his friends. He also enjoys hitting the trails on his mountain bike.

No longer living on campus itself, Langdon resides in Marquette with his wife Sabrina, whom he met at NMU. He assists her with her photography business, both behind the camera and in planning and logistics. The couple enjoys spending time with their Australian Shepherd puppy.

Langdon said that something people may be most surprised to learn about him is the fact that he can sing and dance. He formed some of his closest friendships through his involvement in the former NMU Show Choir, including the development of his relationship with his wife.

Langdon and his wife also share a taste for adventure. They rented a van for a couple of trips on the western side of the nation. They now aspire to get an RV of their own so they can continue their travels well into the future.

When asked who his role model is, Langdon's response was unorthodox. Instead of having a role model, he finds that it is more helpful to aspire to be his best self from day to day.

“I was reading this book titled ‘Best Self: Be you only better.' There is an exercise in it that asks you to reflect on your best self identity. You create the best version of yourself and what you'd like to be. When you're always looking at someone else as a role model, their circumstances are different. It's more helpful for me to say, `What would my best self do in this situation?'”

There's no question that Langon seeks to be his best self, both in the office and beyond. In doing that, he has sought to help others through many outlets. As someone who emphasizes the value of “active listening,” “understanding” and “empathy,” Langdon certainly practices what he preaches, establishing a sense of community wherever he goes.