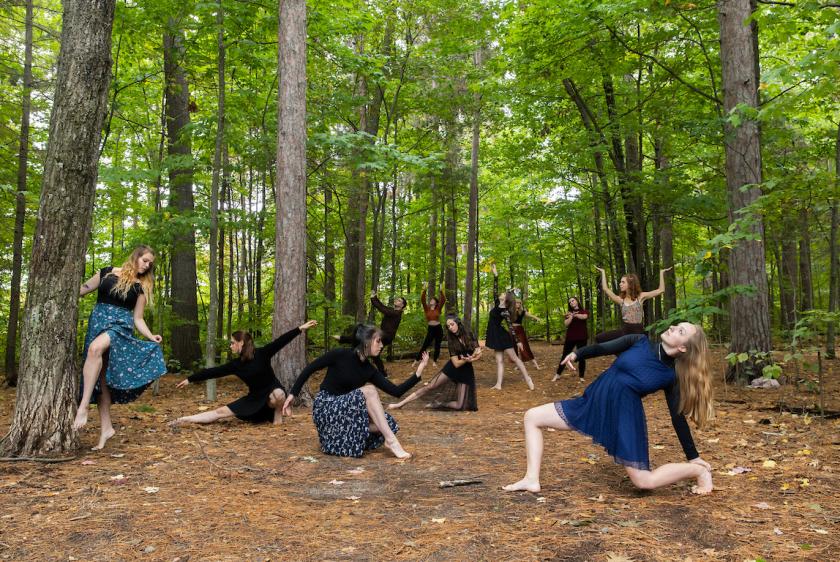 Northern Michigan University's recent production of “What We Leave Behind: Addressing Climate Change Through Dance” has been selected to perform Jan. 9 at the Kennedy Center American College Theater Festival Region 3 event in Madison, Wis.

The collaborative dance, multimedia, lecture and live music performance premiered at NMU in November. It explored how to change the conversation surrounding climate change “by examining and relating to the people and places we love.”

Grundstrom said she was excited and overwhelmed upon receiving the email from the Kennedy Center American College Theater Festival (KCACTF) inviting “What We Leave Behind” to perform at the Region 3 festival. It was the first major project for the CO/LAB COLLECTIVE, which includes students and faculty from dance, theater, music, art & design and business.

“This is a big deal for NMU's dance program, particularly because we are proposing a new bachelor of arts degree in dance,” Grundstrom said. “I believe this production was chosen because of its unique nature, originality, collaborative approach and message. Dr. Jes Thompson's research, which is the backbone of the performance, promotes a more human approach to addressing climate change; one of facts and empowerment instead of convolution and doom.”

Bill Digneit, head of the Theater and Dance Department, added, "This is a huge accomplishment because there are no divisions in KCACTF like there are in athletics based on the size of a university, its program or budget. We're in the same category as the University of Michigan and University of Wisconsin. For us, it's like making the regional finals in a DI sport or the final four of the WCHA. It's cool to know we can be a smaller school in the U.P. and show up with the big guys."

Grundstrom said “What We Leave Behind” is the first NMU show selected for the honor since professor Shelley Russell's original production of "Haywire" in 1995. An earlier musical revue, "Jacques Brel Is Alive and Well and Living in Paris," featuring professor Paul Truckey when he was an NMU student, also was invited to the KCACTF Region 3 festival.

The logistics of preparing for travel and a performance over the holiday break are in full swing.

“We have already begun collecting the cast and crew, making travel arrangements that have been graciously supported by NMU's administration, and working on show adaptations,” Grundstrom said. “Faculty and students who worked on the show will return to campus early and begin intensive rehearsals on Jan. 6 for a Jan. 9th performance at the Mitby Theatre.”

According to its website, the KCACTF is a national theater program involving 20,000 students from colleges and universities nationwide. Regional festivals each January and February showcase the finest of many productions entered for consideration. They also offer a wide range of activities, including workshops, symposia and regional-level scholarship and award programs. Region 3 includes schools in Illinois, Indiana, Michigan and Wisconsin.

For more information on NMU Theater and Dance, click here.