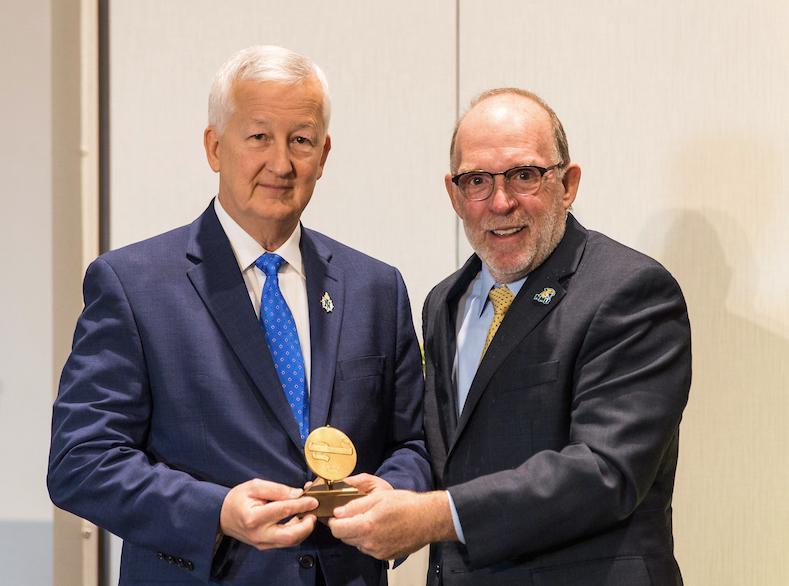 Joseph Evans of Marquette described how he made the journey from “undistinguished freshman” to a successful 34-year career in the domestic and international defense markets when he recently accepted his Distinguished Alumni Award from Northern Michigan University. He has worked with industry and government officials throughout Europe, the Middle East, North Africa and Asia.

“I came from a blue collar family full of love, where both of my parents worked at least one job—most of the time, two—to take care of our family and set enough aside so each of their four boys could get a university degree,” Evans said. “They didn't go to college and it was very important to them that we did. But anybody who saw my freshman year at Northern would certainly wonder how I'm speaking here now.”

After floundering as a student, Evans said he needed time to grow up and think about whether he was able to live up to the dreams and aspirations his parents had for him. He left school to work at a Detroit auto factory, but soon became disenchanted and returned to Northern ready to commit to his studies. He finished his bachelor's degree in engineering technology in 1981and added a master's in political science in ‘83.

“We all find inspiration at different times and in different places,” he said. “It was very important that Northern was there for me when I found mine. Thank you, NMU, for being that someplace special for thousands of students like me over many years; students who needed that special place to fully prepare themselves for the challenges and very interesting and productive lives we all have the potential to live.”

With SAAB North America, Evans led the capture of surface-based radar programs with the U.S. Navy littoral combat ship (LCS) program and the U.S. Army. He was instrumental in the early formation of a strategic partnership with Boeing, which led to a $9 billion new aircraft development and production program for the U.S. Air Force. He was also responsible for evaluating candidate targets for industrial merger and acquisition initiatives.

Prior to joining SAAB Technologies in 2004, Evans spent 18 years with General Dynamics Corporation. He worked in several areas, including engineering design and development, supply chain management, manufacturing, and strategic planning and international alliances.

Evans' first experience working with Swedish industry and governmental officials began in 1990. He developed a campaign to market major defense articles to the Swedish Army. He also worked as a defense analyst and marketing consultant at the Embassy of Sweden in Washington D.C.

Evans serves his alma mater as a member of the NMU Foundation Board of Trustees, the College of Business Dean's Advisory Council and the Academic Advisory Board for the Engineering Technology Department.  He is a past president of the NMU Alumni Association Board of Directors