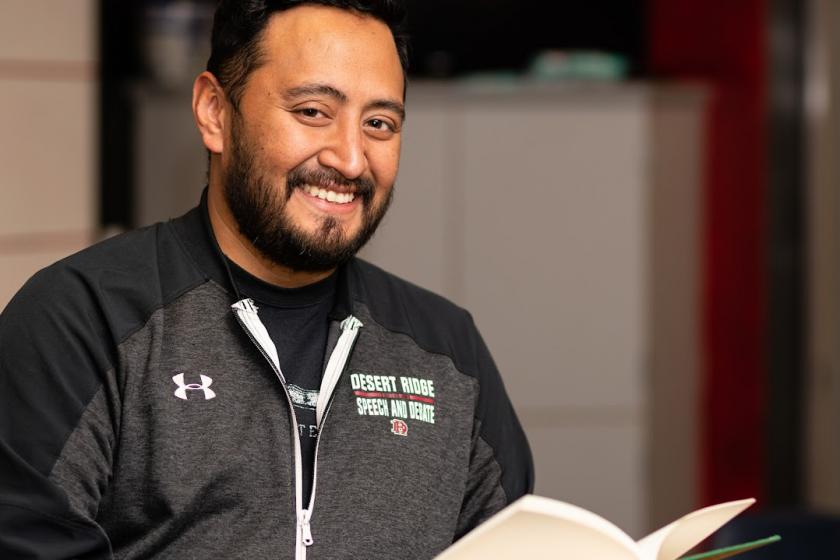 It was on a January day more than two decades ago that Marco Dominguez stepped off a plane in Marquette and witnessed snow falling from the sky for the first time. The first-generation Mexican-American grew up in southern California, but boldly left his comfort zone—both in familiarity and climate—for a winter-semester initiation to Northern Michigan University.

Dominguez said he quickly grew to love the area's changing seasons, scenery and welcoming community. He also had such an enriching student experience at NMU that he completed two English/writing degrees: a bachelor's in 2002 and a master's in 2004.

He may have left the state for a doctoral program and teaching career, but Northern has never left him. Dominguez has parlayed his positive memories into an unofficial role as an NMU ambassador. At least two of the students he teaches at Desert Ridge High School in Mesa, Ariz., have applied for admission to NMU, and specifically mentioned him as having a major influence on their decision.

“A lot of my students tell me they're thinking of going to college in Flagstaff [Ariz.], which does get some snow,” Dominguez said. “So I'll say, ‘If you're willing to go where there's snow, why not consider traveling farther to NMU? It's an enthralling location where you can go to Presque Isle, Hogback or into the woods and find waterfalls in between classes, and read books along a beautiful Great Lake. The seasons are just phenomenal. Winter is too long, but it's so worth it to see the fall leaves change and experience the summers. The city has an old-school look with wonderful, historical buildings and the community is very accepting of NMU students. It's nice to be in such a positive college town.'

“I also emphasize that college is not always about a prestigious name and big price tag. It's often what you put into it when you get there. NMU's smaller size creates many opportunities not available at larger schools. It also has a good student-professor ratio that allows you to build one-on-one relationships with faculty mentors, which I value.”

As an NMU student, Dominguez had the opportunity to travel four summers in a row to Mexico City with Professor Tim Compton, whose scholarly expertise is in Mexican theater. They watched between 16-20 plays over a two-week period each visit. It was a “crash course” in all aspects of production, and energized Dominquez's desire to write plays that he would someday see performed. One of his works, which featured back-and-forth monologues between a woman and her deceased husband, was staged in Lubbock, Texas.

Another faculty mentor was NMU English professor Austin Hummel, who taught poetry and guided Dominguez on a path of being published in literary journals and giving poetry readings across the country, including one at NMU after he had left the area.

It was pure serendipity that first brought the Hollywood native to Marquette. Dominguez earned an associate degree from East Los Angeles Community College, where his father once taught. After he delivered the school's December commencement address as valedictorian, a man approached the family, said he knew NMU well, and encouraged Dominguez to apply because he would have a good chance of obtaining a scholarship. Dominguez did not get the man's name, but followed his advice, figuring he would likely attend for one semester before returning to enroll at a California university.

Instead, he completed two NMU degrees before doing doctoral work at Texas Tech and relocating to Arizona to embark on his career. Dominguez teaches English and creative writing. He has also earned awards for teaching and coaching speech and debate. His team has advanced to nationals every year and one of his students became a state champion under his tutelage.

“It's rewarding to be on the front line and see firsthand how teachers can truly impact kids, helping them change direction or rise up and do amazing things with their lives,” he said. “And for many students, I am the first and only Latino teacher they will ever have.

"It's fulfilling to the soul to see students grow and become genuinely good adults. That's more important to me than money, but at the same time, it's sad that the profession I chose to go into is not valued more. Arizona ranks 48th or 49th in teacher salaries and spending per student. There was a ‘Red for Ed' movement trying to change that. Tens of thousands of school personnel, parents and students participated in a political demonstration in Phoenix. But whenever I feel I have to justify to myself or others why I'm doing a job that's not more financially beneficial, I focus on the positives of impacting students.”

Dominguez is planning a trip to Marquette this summer for a reunion with NMU friends. He missed the last one because he and his wife were awaiting the arrival of one of their two children. Between family and teaching demands, the former Pushcart Prize nominee has been challenged to devote much time to writing poetry in recent years. But here is the first piece he had published in an online journal (printed with permission):

To Pocket a Blackbird

With no one to ask,
the boy I was
kneels on concrete,
alone by the pool.

The water, clear enough
to view the bottom slant,
holds circles on its surface
like waves moving away
from the jet-black bird
at its center. I notice
the body oils yellow
around the bird.

And, not able to help,
I wish for my father
to come and fetch it out,
but no one dives in.

So the boy I was
prays for the water
to soak up the beak
and wings, until all is soaked
and nothing is left
except hints of feathers
like the dark undersides
of waves.

But I can't pray for that,
when birds refuse to sink
to their shadows
and slide down
the deep end.

So I imagine my small hands
entering the yellowed water,
feeling for the blackbird,
and lifting it out with a stream
that seeps feathers and wet
through my fingers,

marking the concrete
to say, here is where a bird dies.
Remember this. 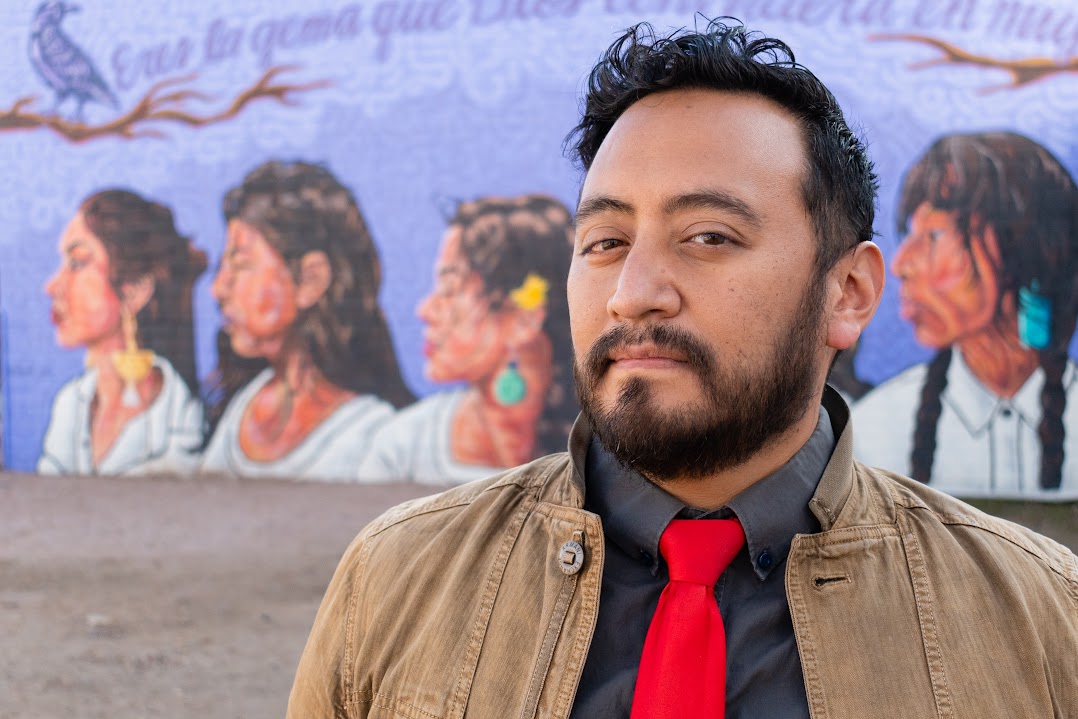 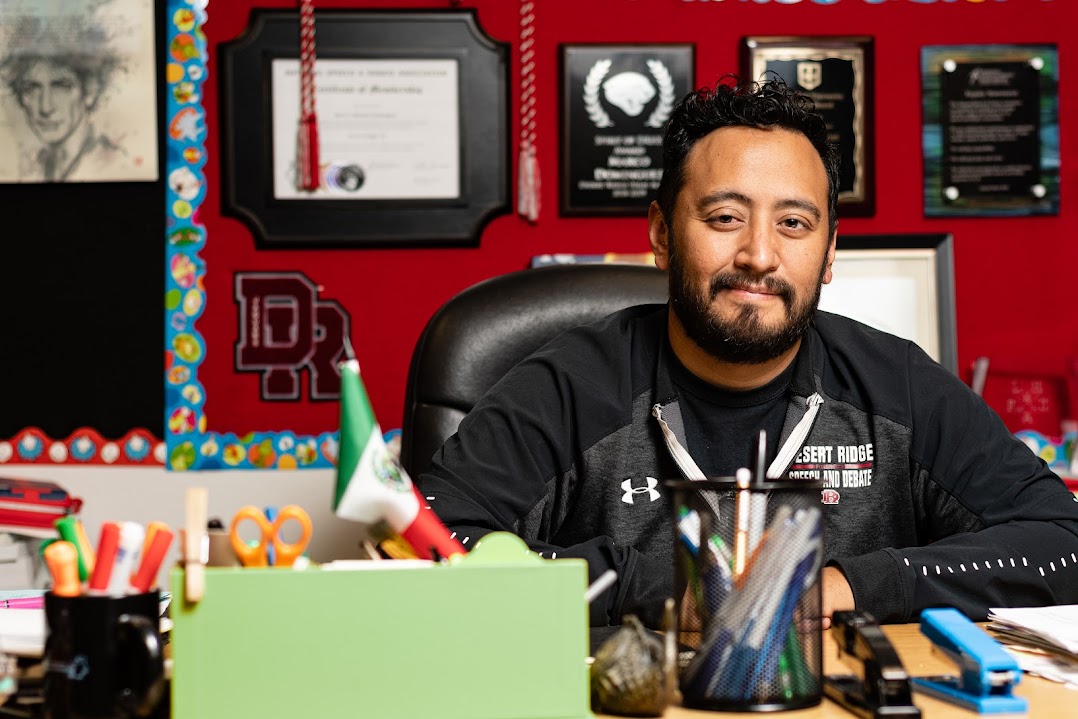