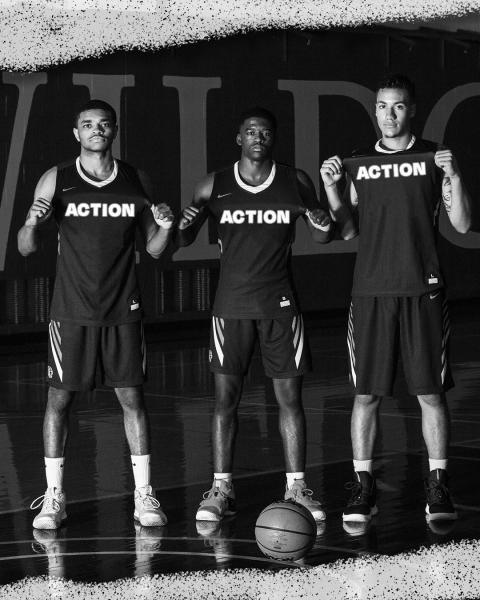 (from left) Mack, Echols and Johnson

The NMU alumni were compelled to engage in something meaningful after watching media coverage of the deaths of George Floyd, Breonna Taylor and others earlier this year.

“We've always kept in contact and, within a group chat one night, we began sharing our emotions related to what was happening and venting about it as people of color,” said Mack, a therapeutic nutrition specialist in metro Detroit. “Then we started focusing on what's next and what we could actually do about it. We decided we wanted to inspire athletes to do more in their communities. We may not be able to change everything, but we can and will change something.”

“I was tired of feeling helpless,” said Johnson, who was training to play professional basketball in Europe at the time of the interview. “Because athletes can be viewed as role models and have a bigger voice in society, we wanted to provoke them to use their platforms for more than just promoting themselves. To talk about something bigger that's important to them, whether that's social justice or something else. We just want athletes to appreciate the power they have to be a positive force in the world and follow through on that with action.”

“I don't want to just be remembered for points scored or wins and losses; I want to be remembered for something bigger than that,” said Echols, who is playing professionally in Croatia. “It's important to become more educated and active, and to be more comfortable talking about difficult subjects.”

The Athletes Igniting Action website states that the first step in promoting change in external environments is to honestly assess oneself internally and demand more. The site invites athletes to sign a letter of intent to educate themselves on influential policies and officials; have ongoing conversations with others about racial and social injustices to increase empathy; vote in primary and general elections after adequate research; and make the movement a lifelong challenge to themselves.

The men were part of the same Wildcat recruiting class. Echols arrived at Northern from Memphis, Tenn., Mack came from Algonquin, Ill., and Johnson is a Milwaukee native. They graduated in 2019 with their respective majors in marketing, biology and accounting.

“The professors were great and the Marquette community embraced our team,” Mack said. “I feel like we always have a second home there. Families opened up their homes to us and invited us to dinner and other events. It was great to receive a warm welcome when we were so far from home.”

The trio returned to campus in August to give a presentation on their empowerment movement to NMU student-athletes (see related video). They plan to lead similar civic engagement seminars at every other school in the Great Lakes Intercollegiate Athletic Conference (GLIAC). They also have a social media presence for the movement and plan to host virtual events.