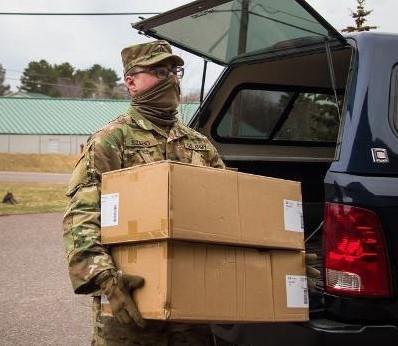 Recent NMU graduate and Michigan Army National Guard Sgt. Adam Szabo is one of six soldiers delivering personal protective equipment (PPE) and other supplies to county seats in the Upper Peninsula for distribution to those in need. He is an automotive logistics specialist with the 1431st “Sappers” Combat Engineers in Calumet.

According to a U.S. Army report, the Michigan National Guard is actively supporting the state's COVID-19 response. Szabo is featured as part of the effort in the Upper Peninsula. He and a fellow soldier make supply runs from a distribution hub in Greenland to the five most western counties.

“I never thought I would go to some of these places, but it makes you realize how the U.P. is really desolate in areas,” said Szabo in the article. “They need the support, too, during these hard times, and once we started dropping off the supplies, you see how thankful they are. Once you get on ground, the importance of the mission actually sets in.”