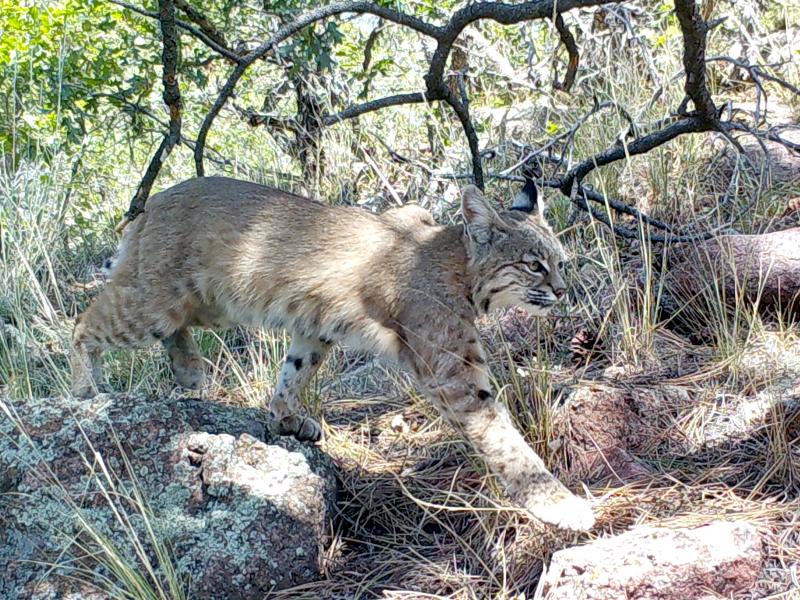 Snapshot USA image of a bobcat

The paper was based on thesis research conducted by NMU 2021 alumna Tru Hubbard, lead author of the publication. Her NMU faculty adviser, assistant professor Diana Lafferty, and scientists from seven other institutions were collaborators.

“I'm fascinated by feline behavior, and the dual role bobcats can play within an ecosystem,” Hubbard said. “In some cases, they act as subordinates under dominant carnivores like gray wolves and pumas, and those interactions are influenced primarily by human-related factors. In other environments, they are the apex predators at the top of the food chain, a role that is more influenced by environmental factors.”

Researchers compared bobcats' use of space and time to eight other carnivore species. They analyzed the distribution of activity throughout their daily cycles, the occupancy level of various species in particular areas, and movement patterns based on whether one species is attracted to or avoiding another that visited a site beforehand.  Results suggest that bobcats have the greatest flexibility among the carnivores sampled. They can modify their behavior to survive across diverse ecosystems relative to other carnivore species present in the system.

“Bobcats were heavily harvested for a long time,” Hubbard said. “With greater regulation, their populations are rebounding. They are adapting to human population growth, even moving into urban areas. A lot of species aren't capable of that. So it's important, for management purposes, to understand their interactions with people and educate the public about this species. Reducing the potential for human-wildlife conflict is my goal.”

The team's research relied heavily on camera trap data collected through the Snapshot USA project from September through October 2019. Unlike birds, which have multiple large-scale monitoring programs, there was no standard way to monitor mammal populations on a national scale until the North Carolina Museum of Natural Sciences and the Smithsonian Conservation Biology Institute collaborated with more than 150 researchers to establish Snapshot USA.

“Our goal was to provide a space for researchers from all 50 states to contribute a subset of their data to a broader initiative to maximize our coverage of the country and better understand drivers of mammal distributions to best inform conservation as rapidly as possible,” said Michael Cove, the North Carolina museum's curator of mammology. “This project showed that, in some cases, bobcats may prioritize avoiding humans more than avoiding larger predators like pumas or coyotes. So humans recreating may influence such species interactions beyond our direct effects in the environment. These results correspond with much of the localized work understanding bobcat behavior, but certainly warrant further examination with other techniques like high-resolution tracking of carnivores and overlapping humans in space and time.”

Field cameras stationed at more than 1,500 sites spanning all 50 states capture images and data that are uploaded for public access and review and archived by the Smithsonian. Lafferty, who directs NMU's Wildlife Ecology and Conservation Science Lab, led the NMU team of contributors to Snapshot USA. The team included then-graduate students Hubbard and Amelia Berquist, along with 15 undergraduate assistants (read a related June 2021 story here).

“We are sincerely grateful to Snapshot USA for making the bobcat research possible,” Lafferty said. “Few previous studies encompassed an area as large and diverse in both ecosystem structure and carnivore populations as this project. Collaboration with scientists at other institutions was really important for this effort. Each member of the team brought diverse expertise to the table, from those with a statistical coding and math background to those with rich conceptual knowledge of carnivore ecology. Each member had something very valuable to contribute.”

Hubbard worked with all of the bobcat study collaborators, individually and through group online discussions and analyses. The experience was valuable career preparation. She said her hope is to secure a job doing additional research within the same realm.

“A lot of my thesis focused on examining how human recreation can affect carnivore ecology,” said Hubbard, who received NMU's Technology Innovation Student Award for her Yooper Wildlife Watch project. “We alter the landscape and have a big impact, as evidenced by the bobcats we studied. My goal is to find ways for people to be able to get outdoors doing what they need or want without having a negative effect on carnivore populations.”