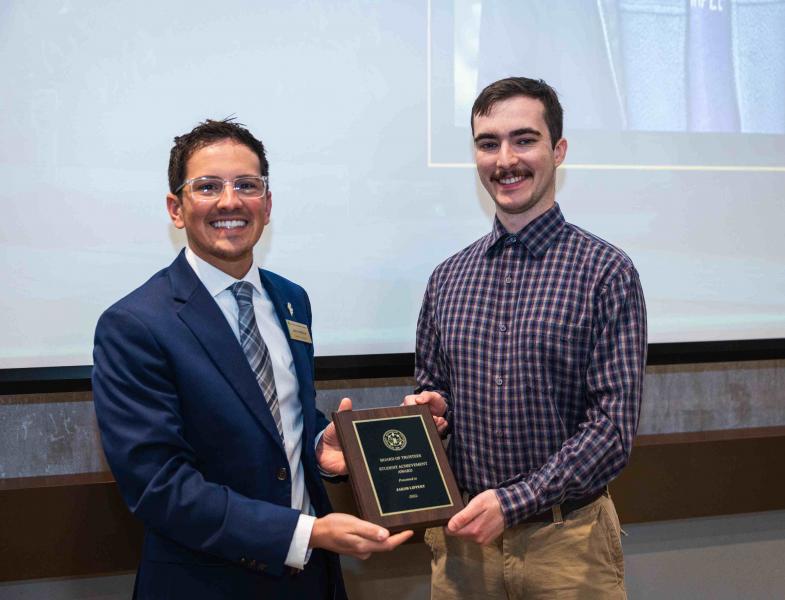 Jakob Lippert of Green Bay, Wis., was awarded one of two Outstanding Graduating Senior awards from the Northern Michigan University Board of Trustees. He also won the Library and Archives Research Award for a paper on the Associated Press and Nazi Germany. Lippert will graduate with full honors April 30, earning a bachelor's degree in history and a minor in German studies.

Lippert started classes at NMU in fall 2018, following in the footsteps of many of his family members who are NMU Wildcats. He participated in the Freshman Fellows undergraduate research program and worked with history professor Robert Goodrich to develop a role-playing game about the German Weimar Republic. As a member of the NMU Honors Program, he wrote an article on gender dynamics in German cinema after World War II for his summer research scholarship project.

The NMU Quiz Bowl team was fortunate to have Lippert as a member since his freshman year. He finished as the career scoring leader among all NMU players since the team's founding in 2009. In April 2021, at the Intercollegiate Championship Tournament–the premier national quiz bowl event at the collegiate level–he finished second in individual scoring among 128 players. His NMU team defeated squads from Harvard, Amherst, Tufts and other universities en route to a 15th place finish among 31 teams. Lippert averaged 66 points per game for the tourney.

“That is roughly the equivalent of scoring about 33 points per game in basketball,” said NMU Quiz Bowl adviser Michael Joy after the tournament. “Jakob proved that he is one of the best quiz bowl players in the country.”

Lippert was a member of Mortar Board honor society and worked as a writing teaching assistant in the history department. He also completed the nationally recognized NMU Student Leader Fellowship program, which requires a community service internship. Lippert worked with the Noquemanon Trail Network to build a new bike trail system in Powell Township.

Lippert has received a Fulbright grant to serve as an English teaching assistant in Germany.