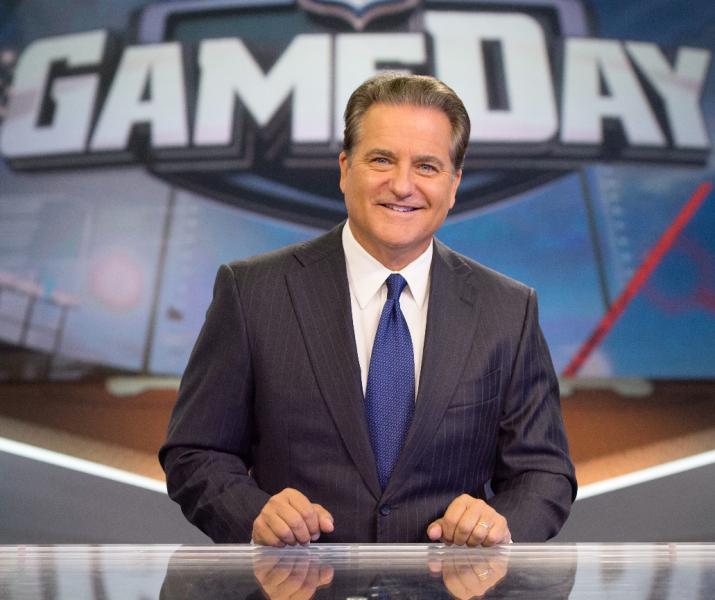 Mariucci on the NFL GameDay set

Steve Mariucci enrolled at Northern Michigan University with the goal of becoming a high school teacher and coach, modeling the career of the mentor who had the most influence on him: his dad. The Iron Mountain native did not achieve that objective, only because he bypassed the high school level and catapulted directly to football's collegiate and professional coaching ranks.

Mariucci's 30-year career began as an assistant at NMU, where he had quarterbacked the 1975 Wildcats to the NCAA Division II National Championship. It ended at the pinnacle of the profession, as head coach of two NFL franchises: the San Francisco 49ers, where he began his career with 17 consecutive regular-season home wins, an NFL record he still holds; and the Detroit Lions. He successfully parlayed his sideline experience into the role of NFL Network analyst.

“Broadcasting is ideal because I still get to live and breathe football, but without the intense pressure that came with coaching,” he said. “Instead of winning or losing, I simply critique and analyze. I tend to lean toward accentuating the positive because that's my nature. I love watching all the teams and their different strategies.”

In anticipation of a documentary film project related to the 1975 Wildcats, Mariucci recruited researchers from the NFL Network to confirm that the team's remarkable turnaround—from losing every game one season to winning a national championship the next—was indeed unprecedented.

“They looked at this from all pro sports, both men's and women's, and from all NCAA and NAIA men's and women's sports. It's never happened, except with that 1975 Wildcat football team. That's why the film is so different and interesting. It puts Rudy to shame,” he joked. “It's not like Alabama winning another one. It stands alone.”

Put Your Hand on the Line, the documentary directed by Scot Fure of Marquette, premiered at NMU's 2018 Homecoming. It recently streamed online as part of the 2020 Dances with Films Festival in Los Angeles. It also won awards earlier this year at the Central Michigan International Film Festival and at WorldFest Houston. Mariucci's NFL Network colleague, Rich Eisen, served as narrator.

As a sophomore, Mariucci had moved into the starting Wildcat lineup partway through the first game of the 1975 season and led the team to its storybook-ending victory over Western Kentucky for the national championship. In hindsight, it is hard to believe he had come close to quitting the sport shortly after arriving at Northern with Tom Izzo, his best friend and Gries Hall roommate.

“During training camp as a freshman, I just reached a point that I didn't like football anymore,” Mariucci recalled. “So I called my dad to come pick me up and packed my bags. He drove up to Marquette and told me to bring my bags back to my room so we could talk about it. Then we went to one of the coaches, who convinced me to stay one more day, then another day and another day after that. It got better once school was in session and all the students were on campus and more activities were going on. If my dad had been soft or easy, trying to be my friend, he would have caved in and taken me home that day and I never would have played college football. But he didn't.”

Ray Mariucci's calculated approach to the situation demonstrated his combined strengths as a teacher, guidance counselor and coach. He established Kingsford's first wrestling team in 1964 and played a major role in developing the sport in the Upper Peninsula.

“I watched him coach and he coached me in the yard,” Steve said. “He taught me how to train and be disciplined and make the sport important. He always said that you either do it right or don't do it at all. That was my first influence.”

“The guy at Northern who made the most impact was Buck Nystrom. He came in my second year as offensive line coach and believed in me before I believed in myself. He sat down with me, with a cigar coming out of his mouth, and said, ‘Mariucci, you did some good things. You're going to be all right. We're going to use you to run the option.' He made the whole team work like dogs, but everyone was ready and willing to do that. He wouldn't let people feel sorry for themselves for losing 10 games the previous season.”

Mariucci was inducted into the NMU Sports Hall of Fame for his achievements, which included three-time MVP and two-time All-American. Upon earning a bachelor's degree in health education in 1977, he transitioned from player to assistant coach for a season and later earned a master's in education in 1983.

After NMU, Mariucci coached at California State University, Fullerton. His career also took him to USC, Cal, the University of Louisville and the Orlando Renegades of the USFL. When he shifted to the NFL, Mariucci served as an assistant under prolific coaches John Robinson with the Los Angeles Rams and Mike Holmgren with the Green Bay Packers. He later secured the head coaching jobs with the 49ers, who advanced to the 1997 NFC Championship, and his home state Lions.

Away from football, Mariucci is committed to supporting his alma mater and community causes. With his longtime best friend, he established the Izzo Mariucci Academic Center at NMU, along with the Izzo Mariucci Fitness Center and a student-athlete scholarship in their hometown.

He and his wife, Gayle, recently broke ground on the Steve Mariucci Family Beacon House. The new facility will be built closer to Marquette's relocated hospital and continue an 18-year mission of providing “a home away from home” for the families of Upper Peninsula patients receiving critical medical care. Mariucci and his brothers had stayed at the previous Beacon House when their mom was in the hospital battling cancer. A Legacy of Love Campaign is underway to raise remaining funds for the new construction project.

In reflecting on the alumni award and his student-athlete experience, Mariucci said NMU may be the best-kept secret in Michigan.

“It's an excellent university academically and, while we don't play in The Big House, we have some competitive sports teams that take pride in what they do. The remote location near Lake Superior may not be for everyone, but for those who show up, it's a great experience and I highly recommend it. I'm very proud to be a Northern graduate, and I'm very honored to receive the Distinguished Alumni Award.” 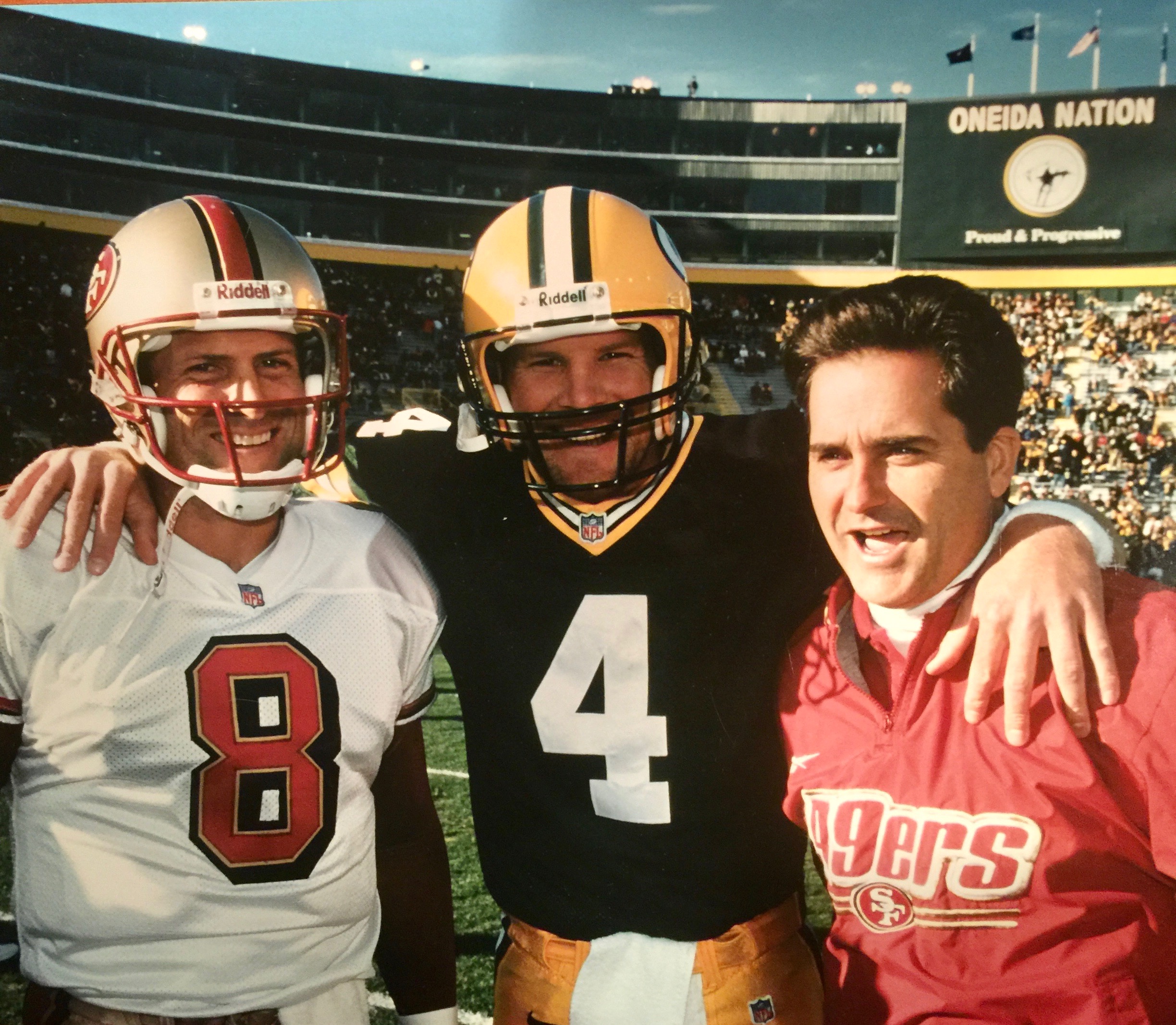 Head coach Mariucci with his 49ers quarterback Steve Young and Packers quarterback Brett Favre, whom he used to coach as an assistant in Green Bay.
Prepared By