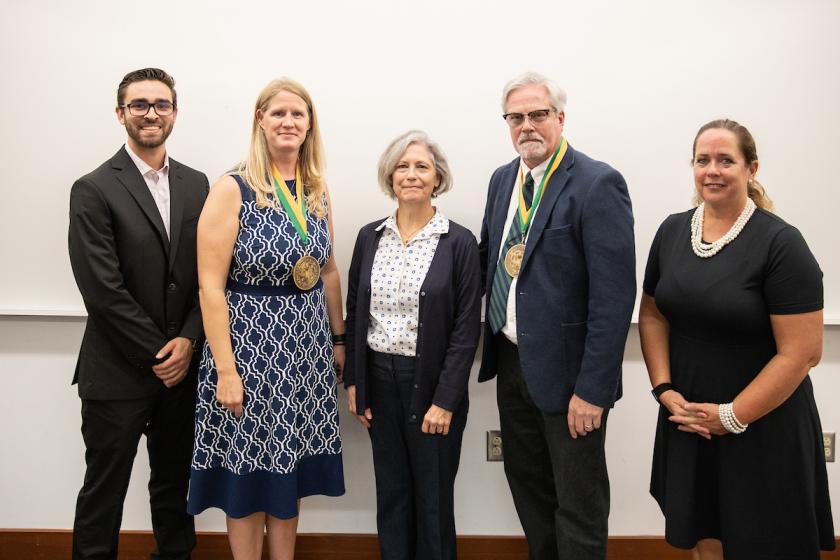 School of Health and Human Performance Professor Maggy Moore was recognized at a Sept. 19 ceremony as the first recipient of the Mark R. and Eileen Lovell Endowed Professorship. The distinction focuses on education, research and patient care related to concussions.

NMU alumnus Mark Lovell ('77 BS in psychology) established the professorship with a $1 million commitment. He is an internationally recognized concussion expert and developed the ImPACT Test, the first and most scientifically validated computerized concussion evaluation system. As he transitions into retirement, Lovell remains a neuropsychological consultant for the NFL Players Association, NHL, USA Women's Olympic Hockey team, the U.S. Ski and Snowboard team, World Wrestling Entertainment (WWE) and other organizations.

“One of my overall goals is to have this be a catalyst for other individuals who've gone through this great university to make this a part of their legacy,” he said. “The university couldn't have picked a better person for this professorship. I've known Maggy for a number of years now, and she has been extremely helpful, both in her research with regard to the ImPACT test, but also in helping to establish concussion awareness and services in Marquette area and throughout the U.P. I'm excited to see what's going to happen with the new research she's doing. I think it will make NMU a center of excellence, if you will, in terms of concussion research and awareness.”

Moore has worked at NMU since 2006, and has taught full time in the School of Health and Human Performance since 2008. She began her academic career at NMU with a major in athletic training and concentrations in both biology and chemistry. Her primary research focuses on areas of neurocognition related to both concussions and migraines. She has collaborated with professors from other disciplines, including psychological science, biology and clinical laboratory sciences.

“My overall goals include finishing research projects that are in the final stages and seeing them through to publications and presentations,” Moore said. “I'm also pairing with clinicians in the area to find gaps they're experiencing related to concussions and trying to streamline the process for the best outcome for the patients.”

“I recognized from the get-go that Dr. Moore is passionate, driven and on a mission,” said Elizabeth Wuorinen, associate dean and director of the School of Health and Human Performance. “She has a lot of work that needs to be done and she wants to do it. She is not only passionate about the research, but extremely interested in helping and guiding students.”

“One professor can influence hundreds of lives,” she said. “Endowed professorships reflect this by recognizing extraordinary teachers and scholars who drive innovative research, enrich the academic environment, attract the brightest students and faculty members, and bring distinction to NMU.”

Northern granted Lovell an honorary Doctor of Science degree when he delivered the keynote address at spring commencement in 2011. He also is a past recipient of the NMU Distinguished Alumni Award. Mark and Eileen previously established the Robert and Roberta Athletic Scholarship in memory of Mark's parents.