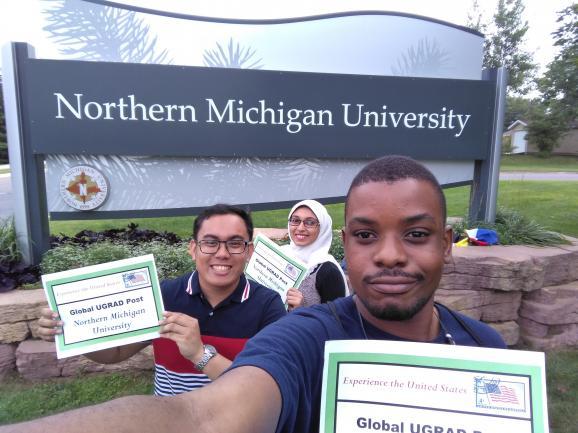 Bruno Amilcar of Maputo City, Mozambique in East Africa, is one of three students attending NMU this fall through the Global Undergraduate Exchange Program (UGRAD). The program is designed to promote cultural exchanges between American institutions of higher learning and foreign students. Amilcar is a junior political science major with a minor in theater. He is anticipating his upcoming role as Father Christmas in the NMU production of Scrooge!

The U.S. Department of State assigned Amilcar to the UGRAD program at NMU through a scholarship.

“Since the age of 10, I was involved in social causes at my school and in my community,” he said. “When I was 15, me and my friends started a small non-governmental organization to fight against bullying in our school and tried to make connections with other schools to combat against bullying. I have participated in the YALI leadership center in Southern Africa, the Model UN conference, and the South African Institute of International Affairs (SAIIA) Wildlife Conservation. I have been in many conferences around South Africa, and included in conferences about LGBTQ and mental illness support.”

Amilcar said as a member of the LGBTQ community, and since coming out at 17, he is always up to do something that encompasses protecting the rights or people in that community.

“It’s really amazing attending the [NMU] ALLIES meetings. I’m learning a lot with the LGBTQ community in America,” he added.

Some of Amilcar’s favorite memories at NMU so far include making friends that come from different states and working with former Broadway actor and Professor Paul Truckey at Forest Roberts Theatre.

Amilcar said he ultimately wants to help others by working in social services. He plans to land an internship with the United Nations hopefully, and eventually land a job at the U.N. headquarters in New York City.

“Everything I do is to conquer my biggest dream, which is to work in the United Nations and work with diplomacy for the rest of my life,” he said. “So knowing more countries, making networks, going new places and getting in touch with other cultures is the best start to getting what I want.”

The International Education Services Office at NMU is collaborating with World Learning to bring students from other nations to campus for cultural exchanges. This aligns with the university’s strategic focus area of global outreach.