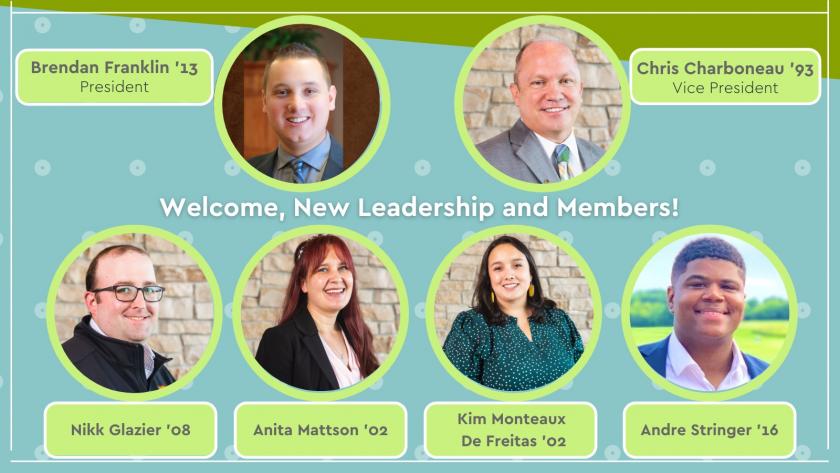 Members are selected by fellow alumni to represent the alumni base. They bring a unique perspective and passion to provide strong leadership for association programs and activities in collaboration with the University and the NMU community.

“I am thrilled to serve as the president for the Alumni Association Board of Directors for the next two years with Chris as our vice president,” says Franklin. “Together, we are excited to welcome new members to help propel our initiatives forward. It is an honor to represent our NMU alumni and I am inspired by the passion, energy, and expertise of our entire board.”

Franklin is the Manager of Nursing Services for the Emergency Department at Munson Medical Center in Traverse City. He previously worked as an RN in the Emergency Department at Beaumont Health System in Grosse Pointe, Mich. While attending Northern, Franklin was a Campus Visit Program Assistant and a Discovery Initiative Student Representative. He received the Michigan ENA Rising Star Award, was an Eagle Scout and received the 2021 Nurse Manager of the Year Award from Munson Medical Center. He was a recipient of the Northern Michigan University Leadership Scholarship, Michael D. Nunnally Award Recipient for Outstanding Community Service, and a Superior Edge Program Graduate. Brendan graduated Cum Laude in 2013 from NMU with a BS in Nursing. He has since obtained his Master of Science in Nursing degree from Chamberlain University. Brendan is married to Sara ('13). Together, they enjoy hiking, camping, and traveling.

Charboneau retired from teaching music in 2019 after a 26-year career. He earned a bachelor of music education degree at NMU, studying both piano and percussion, and a master in the art of teaching degree from Marygrove College in 2005. Throughout his teaching career, Charboneau's bands fared very well at festivals and competitions. He is included in the 1995, 2000, 2002 and 2004 editions of “Who's Who among America's Teachers,” which places him in the distinct group of less than 1% of America's teachers to be nominated four times for this high honor. Charboneau is an accomplished pianist, percussionist, set drummer and vocalist who also enjoys sports.

A graduate of NMU's construction management program, Glazier is a project manager at The Whiting-Turner Contracting Company and works out of their national headquarters in Baltimore, Md. His tenure with the company began as a summer intern. Upon graduation, he became a project engineer and quickly moved up the ranks. He is now a project manager specializing in healthcare construction. After graduating, Glazier stayed connected to NMU by recruiting construction management majors for internships and full-time positions. He and his wife, Liz, live in Germantown, Md. with their daughter Emma and rescue dog Jackson.

As a graduate of NMU's chemistry program, Mattson serves as an organic synthetic chemist with a strong medicinal chemistry component in her research. The Marquette native is a Professor and Chair of the Department of Chemistry and Biochemistry at Worcester Polytechnic Institute. She oversees the Mattson Group, a laboratory conducting research to develop new molecular methods for synthesizing treatments for drug-resistant cancers. In 2017, she received a $1.7 million award from the NIH to support this work. Mattson was also a 2020 recipient of the Alumni Achievement Award. She lives in Holden, Mass. with her husband James Stambuli, and their 6-year-old daughter, Kate and 7-month old son, Wyatt.

Monteaux De Freitas, Ed.D., is a multiracial, first-generation college graduate from the Northwoods of Wisconsin. Monteaux De Freitas received her Bachelor of Fine Arts degree from NMU where she joined Phi Sigma Sigma and was active in the Art Students League and Random Acts of Artists. She earned her Master of Science in College Student Development and Administration from the University of Wisconsin-La Crosse and Doctorate of Education in Educational Leadership and Policy from the University of Vermont. Monteaux De Freitas currently serves as the Director of Sorority and Fraternity Life at The Ohio State University. Monteaux De Freitas volunteers for various organizations including the Association of Fraternity/Sorority Advisors (AFA), National Association of Student Personnel Administrators (NASPA), and Girl Scouts. She lives in Columbus with her partner, Dr. Xavier De Freitas, who also works in higher education, and their daughter, Eloise.

A Detroit native, Stringer earned his bachelor's degree in marketing from NMU in 2016 before returning back to Detroit to begin a career in sales in the mortgage industry. Stringer worked for Quicken Loans (QL) as an executive mortgage banker for four and a half years, but felt his calling was to serve others. He ended his relationship with QL to start a journey toward healthcare. Stringer is currently a Pre-Medical Post Baccalaureate Student at an Atlanta College. He is working toward a career in healthcare with hopes of becoming a doctor. During his undergraduate career, he was very active in the community and enjoyed giving back. Stringer lives in Atlanta, Ga. and enjoys hanging out with his Great Dane, Olivia.

The new board members were welcomed during the NMU Alumni Association Board of Directors Homecoming meeting in October.

This release was prepared by the NMU Alumni Association.