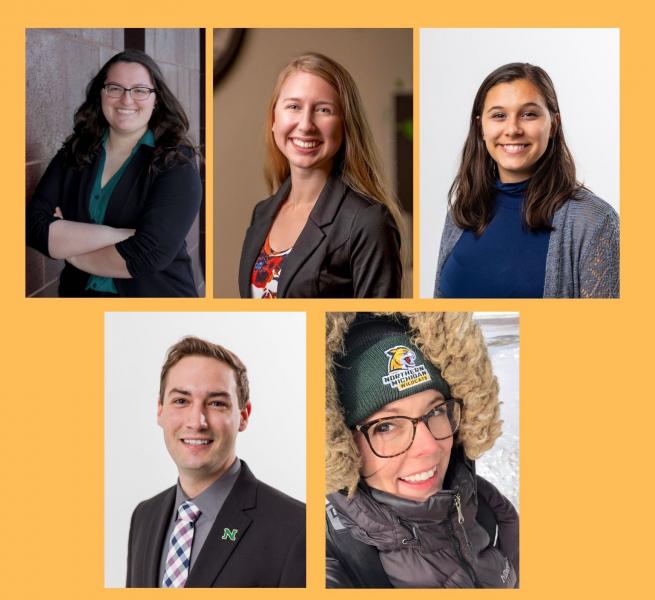 During her time at NMU, Kendall was a member of the Mortar Board honor society and the Beta Gamma Sigma Honorary Business School Society. She completed the Student Leader Fellowship Program and all four edges of the Superior Edge Program. She also was involved in several campus organizations, including the College of Business dean's advisory council, Campus Cinema, Northern Arts and Entertainment and Platform Personalities.

At NMU, Mansfield planned events, represented her house at hall government, and was captain of her house's Relay for Life team. She also completed the Student Leader Fellowship Program and was a member of the NMU Diversity Student Alliance and Mortar Board. She worked in the Center for Student Enrichment as the Leadership Program Coordinator.

Rotundo graduated with a bachelor's degree in public relations and a minor in art and design. She was an active member of the NMU chapter of the Public Relations Student Society of America and held three positions on the executive board. She participated in numerous volunteer activities through the organization and attended two international conferences. She completed the Student Leader Fellowship Program and served as a resident adviser in Magers Hall.

In the summer of 2018, Rotundo completed an internship at an international PR firm in Ireland.  She also interned in NMU's Sports Information Office. Most recently, she was a student employee in NMU Marketing and Communications, where she assisted with social media accounts and content, and helped with the NMU website conversion project. Rotundo will return to NMU in the fall to pursue a master's degree.

Hartz enrolled at Northern after serving with the U.S. Marine Corp infantry from 2013-18, rising to the rank of corporal. He was a history major and outstanding May graduate in the department, and a political science minor.  Hartz was very involved in the student government organization, ASNMU, starting as a rep before he became director of external affairs. This led to two years representing students at the Academic Senate.

Hartz also served on the following university committees: the SISU Innovation Work Group, the Center for Student Enrichment Big Ideas Committee, and the Student Athletic Engagement Committee.  He was a member of the Radio X Board of Directors, the Student Law Forum, and the Student Conduct Board. He will attend the University of Tulsa College of Law in the fall.

Fox is a Global Campus distance education student in the Master of Public Administration (MPA) program.  She lives in Euclid, Ohio, and works for the Federal Reserve Bank of Cleveland. Fox has been an incredible asset to the Global Campus outside of her strong academic performance. She regularly contributes valuable content through written and video testimonials. She is intentional about spreading positive messages and sound advice for those who might be overwhelmed with online learning commitments and formats.

Despite not being on NMU's campus, Fox participates in student activities. She has been known to travel hours to see NMU's hockey and football teams play when they are on the road. She has given back to NMU by supporting the Food Pantry, participating in the Virtual Wildcat Fun Run 5K, and sporting the “Beat Tech” tee of the Puckhead student group. She also has been planning virtual MPA happy/trivia hours to connect with her fellow distance learner classmates.