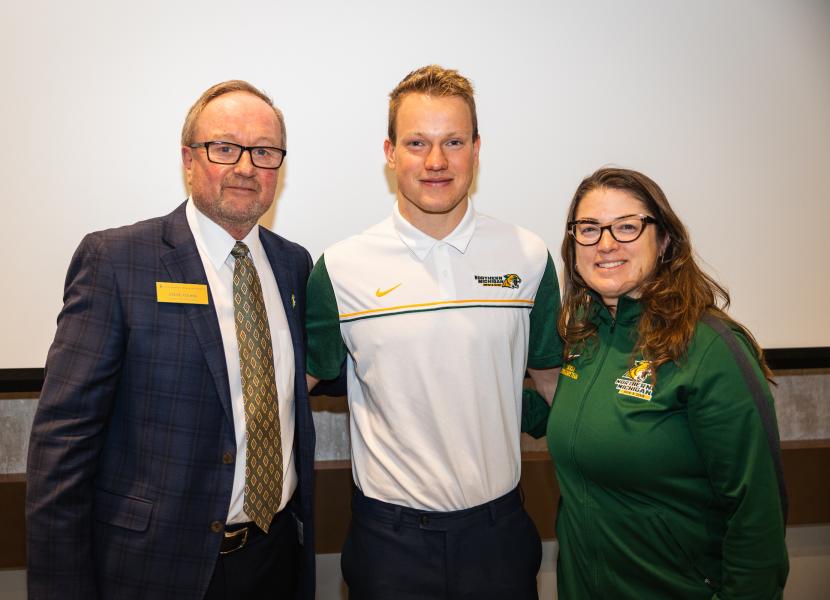 Northern Michigan University NCAA champion swimmer Ondrej Zach, who won the men's 1,650-yard freestyle at the Division II national meet in March, was formally recognized for his achievement at the April 29 NMU Board of Trustees meeting.

Zach, the top-ranked distance swimmer in the country this year, capped his season with a national title in the longest event of the meet. His time of 15:09.55 broke his previous school record, set at last year's NCAA Championships, where he was the national runner-up. This year, Zach pulled away from the field at the halfway mark of the race and never looked back, winning by four seconds over the next-fastest finisher.

“It was a beautiful swim,” said Wildcats Head Coach Heidi Voigt in describing the race. “Ondrej set his pace of 55 seconds each 100 and never slowed down. No one else could stay at his pace. I loved watching everyone in the pool just fall farther away.

“Never have I coached a more humble and grateful athlete. He is a caring teammate, always ready for a challenge in the pool and excited by his studies here at NMU. He likes to learn about psychology and physiology of coaching swimming as he would like to be a coach someday, so we have a lot of fun discussions.”

Overall, the Wildcat women finished the NCAA championship in 13th place and the men in 18th place. NMU earned 13 All-America honors and 16 Honorary All-America awards at the competition.

“I should also mention that a few weeks after the NCAA Championships, Ondrej traveled to Florida to compete in the Open Water National Championships, where he finished sixth in both the 5- and 10-kilometer distance races,” said NMU Board Chair Steve Young during the recognition.

Zach was a junior in eligibility this year, but is a first-year graduate student academically, studying exercise science.  He is a native of the Czech Republic and was a member of the 2021 Czech National Swim Team.