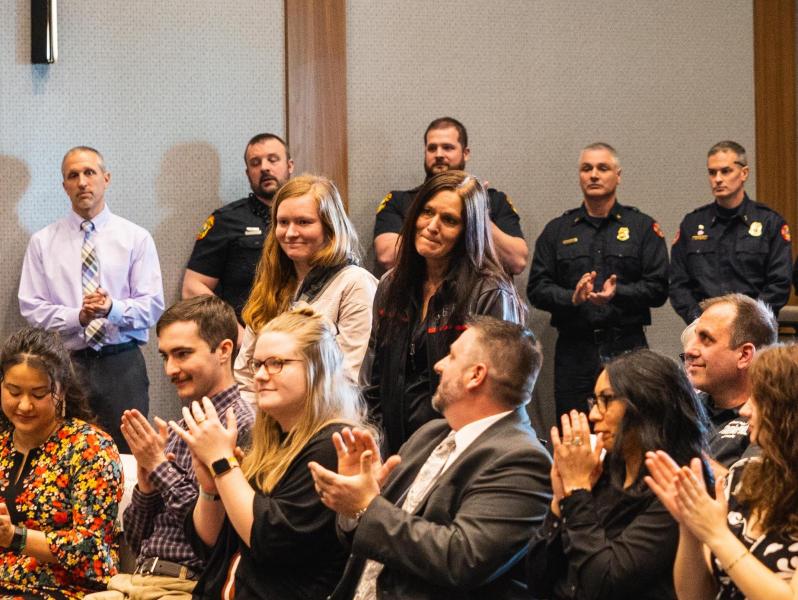 Penhale and her daughter (standing), with some of her rescuers near and behind her.

Five individuals and five agencies who assisted in the lifesaving rescue of Northern Michigan University employee Stephanie Penhale were publicly recognized at the April 29 NMU Board of Trustees business meeting. Penhale is director of the Network Infrastructure Center. She and her 22-year-old daughter, Lily, attended the session to personally thank those whose quick actions made a critical difference until more advanced medical care could be provided.

“On Friday, March 25, I lost consciousness, stopped breathing and my heart stopped beating in my Cohodas Hall office,” wrote Penhale, in a statement read aloud at the meeting.

“While I remember nothing of the event itself, what I heard in the days and weeks that followed was how lucky I am.  How lucky I had so many people who responded so quickly. How lucky I am that I had trained people that performed lifesaving measures. How lucky that I received rapid care from everyone around me that allowed me to beat the odds and be here today. I would like to say ‘Thank you' to all these people who helped make me the luckiest person on March 25.”

On behalf of the NMU Board of Trustees, Chair Steve Young praised the rescuers and encouraged a round of applause from attendees.

“We commend the quick actions of these individuals and departments in their response in saving the life of one of our own, Stephanie,” Young said.

Penhale reported that she had no previous health problems prior to her medical emergency and has had no issues since. She will be undergoing genetic testing in May to see if doctors can identify a potential cause that is unknown at this point.