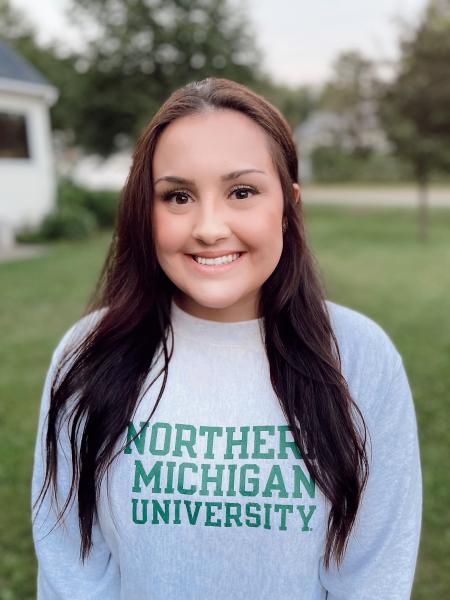 Northern Michigan University alumna Madiline McNamara has been conditionally accepted to Michigan State University's College of Human Medicine through its highly competitive early assurance program. She graduated in May with a bachelor's degree in biology with a physiology concentration and said she hopes to practice medicine in her hometown of Iron River or elsewhere in the Upper Peninsula.

According to Erich Ottem, NMU biology professor and pre-med adviser, MSU's early assurance program targets first-generation college students who have a strong desire to practice a high-need specialty in areas where there are health care shortages.

“It's open to any university, however the real focus is on mid-sized regionals like Northern,” said Erich Ottem, NMU biology professor and pre-med adviser. “It's highly sought after and very prestigious, requiring a high GPA and good MCAT score to qualify. A lot of students from rural areas all over Michigan apply for very few available slots. Madi's really bright, tenacious and an excellent people person. She's also fiercely loyal to her hometown of Iron River.”

McNamara said a Type I diabetes diagnosis at the age of 10 sparked her interest in medicine.

“It first entered my mind to go that route when I was young and going in and out of hospitals. I wanted to know what was wrong with me and learn more about my own body. That snowballed into a dream of becoming a doctor. My goal is to help Type I diabetics. Having a doctor who can truly relate to that disease would be an awesome connection. I would understand what they're going through and make them feel safe.

“I'm super humbled and grateful to be accepted by a medical school whose mission matches what I believe in: getting medical care to rural areas where it's currently sparse. Going to a smaller university was a big factor for me. I had more one-on-one time with professors who were so helpful. I couldn't have done it without Dr. Ottem this past year. He encouraged me to go for it when I was on the fence, answered my questions, wrote a letter of recommendation and helped me prep for my interview. I called him right away when I got the email that I was accepted and he was excited.”

After the seven-month “involved process” required to gain admission, McNamara is taking a gap year before she enrolls in medical school in fall 2022. Perhaps it is no surprise that she will spend the time serving her hometown—in this case, as an educational specialist in upper-level science classes at West Iron County High School.