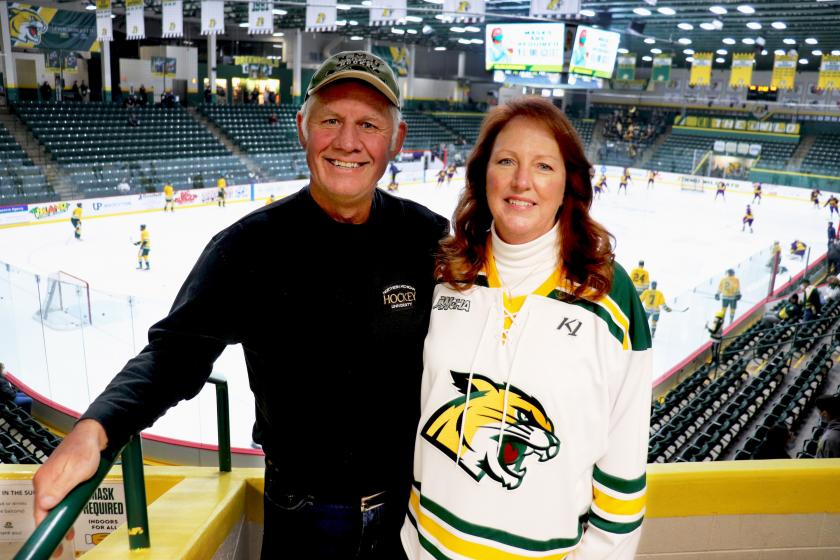 “Private donors bring extras to athletics that aren't covered by operational budgets,” said Cowell, a retired CPA. “They allow coaches—especially those from smaller schools like Northern—to gain more equal footing with the big schools. We wanted to provide a discretionary fund that would give coaches now and in the future additional arrows in the quiver when it comes to recruiting.

“We don't have the huge facilities or large community fan base in Marquette that bigger college towns have. Selling tickets isn't enough to support the program here; it takes private money to increase the quality and compete with larger D-I programs.”

“If you look at the size of Marquette and the seating capacity of the Berry Events Center, you're essentially relying on 10 percent of the population to attend every weekend to sell out,” added Olivier, a 1983 computer systems alumna who retired from a career managing Northern's library automation systems. “That's just not realistic most of the time.”

The financial commitment is the couple's most recent injection of funding into the program. Last year, they contributed to the Wildcats' team room renovation project.

“Bob and Kathy have a long history of supporting NMU and NMU hockey, and this gift has the ability to transform the student-athlete experience for generations to come,” said Wildcat Head Coach Grant Potulny. “Donor support is the future of college athletics, and Bob and Kathy have moved NMU hockey to the forefront of where college hockey is trending. To have support like this for the student-athlete experience at NMU will create a lifetime of memories for our players.”

Cowell said he likes to tell current players that he has been a fan of Wildcat hockey for longer than they've been alive. In fact, he has followed the program since its inception in 1976. He later became a member of the former Blueline Club affinity organization and served as its president for more than 20 years.

While basketball was his sport of choice growing up, Cowell began attending hockey games as a student at Michigan State University—first in “an old barn where there wasn't a good seat in the house” and then Munn Ice Arena. His interest continued when he moved to Marquette and he became an avid Wildcat fan.

Olivier is a Marquette native whose initiation to hockey began when she lost an undisclosed bet with Cowell while they were dating. The stakes required her to accompany him to a game at the Wildcats' former home venue of Lakeview Arena.

“We went to the donors' room between the first and second periods,” she recalled. “I met up with a college classmate and ended up talking through the second period and didn't come out until the third. Bob said I would have to go with him again because I didn't watch the whole game. I didn't understand hockey fully, but I've come to love it. They're elite athletes the way they skate, and it's a fun, fast-paced sport.”

Three grandsons of the couple play youth hockey in Marquette. Perhaps one of them will someday sport a Wildcat jersey, boosting Cowell's and Olivier's enthusiasm for the program even more.

For more information on giving opportunities at NMU, visit https://foundation.nmu.edu/.