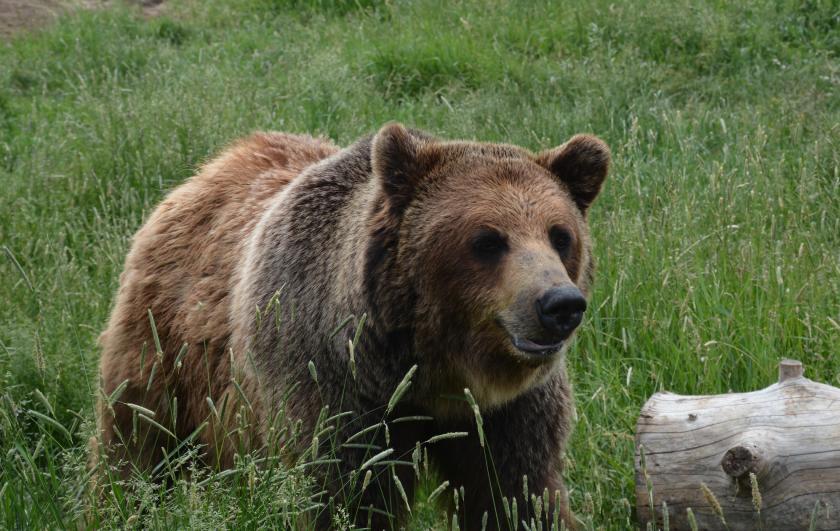 A Northern Michigan University alumna and her NMU faculty mentor contributed to a published paper on a recent study of Alaskan brown bears that found significant variations in their gut microbiomes, depending on where they live. The finding advances scientific understanding of the relationship between wildlife habitat, diet and gut microbiome diversity, and facilitates more informed decisions to support the health of wildlife species.

Sarah Trujillo, who earned her master's degree in biology in December 2021 and started a full-time job with the U.S. Fish and Wildlife Service soon afterward, is the paper's lead author. The effort was part of her thesis research and a massive collaboration involving scientists from three federal agencies, along with academic researchers from NMU and North Carolina State University (NCSU).

“Bears are particularly interesting in this context because they're omnivores,” said Diana Lafferty, assistant professor of biology at NMU and co-author of the paper. “Bears function as predators and as scavengers, and they have a relatively simple gut system, which means their microbiome may play a particularly important role in helping them extract nutrients from their diet. With this project, we wanted to establish a baseline of what ‘healthy' microbiomes look like for these animals, which are relatively undisturbed.”

“The gut microbiome is the ecosystem of microbial life that populates an animal's digestive system – and this microbiome plays a major role in an animal's well-being,” added Erin McKenney, co-author and assistant professor of applied ecology at NCSU.

The researchers benefited from piggybacking on other research efforts that were previously underway. The National Park Service was already engaged in research projects that involved tracking and observing wild brown bears at three national parks and preserves: Katmai; Lake Clark; and Gates of the Arctic.

“The Alaska wilderness, important habitat for brown bears, is changing,” said Grant Hilderbrand, co-author of the study and associate regional director for resources for the National Park Service in Alaska. “The gut microbiome serves as a new diagnostic tool for understanding the health of wildlife populations. It can also help us predict how animal health will change as the environment changes. The study we've done here lays the foundation for advancing our understanding of gut microbiomes in Alaska's iconic brown bears.”

For this study, the researchers analyzed 66 fecal samples from 51 brown bears that were sampled during previous research operations. Because these samples were collected as part of ongoing research initiatives, the researchers also had data on each bear's age, sex, size and body condition.

Microbial DNA was extracted from the fecal samples and assessed to determine what kinds of microbes were in each sample.

“We found significant differences in the diversity of the bears' microbiomes at each of the three parks,” said Trujillo, who worked on the project during her graduate studies at NMU. “Katmai had the most diversity, and also had the most diverse array of food sources available. Gates of the Arctic, which had the most limited array of food resources, also had bears with the least diverse gut microbiomes. In other words, we found what we expected: the more diverse the diet, the more diverse the gut microbiome.

“However, while we found clear distinctions in microbiome diversity at each park, those differences could not be fully explained by diet alone. There appears to be something else at play that we don't fully understand yet. That's an area for future research.”

The paper, “Intrinsic and Extrinsic Factors Influence on an Omnivore's Gut Microbiome,” is published in the journal PLOS ONE. Other study co-authors include Kyle Joly and Buck Mangipane of the National Park Service; Lindsey Mangipane, David Gustine and Joy Erlenbach of the U.S. Fish and Wildlife Service; and Matthew Rogers, of the National Marine Fisheries Service.

This story was adapted from an NCSU release.