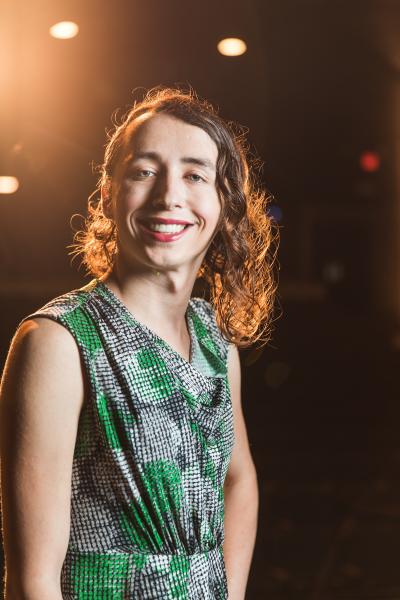 Sam's main pursuit as a director is to work on pieces by living playwrights that elevate the voices of the LGBTQIA+ community, according to her biography.

“Initially, when looking at shows, I was looking for a piece that would meet both Ashley's and my goals,” said Sam. “This script is a feminist piece, and it is about the experiences of the LGBTQIA+ community. OPEN is about a female magician, which is a rare occurrence, for approximately 2-5% of all professional magicians in the world are women.

“The protagonist is recounting her relationship with her girlfriend, so it's a piece centered on women. I also have had a deep love of magic since adolescence. This play entails everything I have been looking for in a show. We have great people working on it, a great purpose and a great script.”

Having largely directed in face-to-face theatrical settings, Sam said that she embraced the unique opportunity to adapt her skills to fit a Zoom platform.

“Directing for Zoom has a weird middle ground between stage and film directing. It's all about finding the right mix of techniques from both. On a proscenium stage, you don't see micro-movements like the tilt of a head or a slight change of the arms. Little things like these can make a difference on a Zoom platform, so our blocking is very specific. The camera can see everything.”

Sam said that she is working with Kayla Drescher, a Los Angeles-based magician, as a consultant for the show. Drescher has appeared on television programs like Penn & Teller: Fool Us, Access Hollywood and NBC's Today Show, where she won David Copperfield's choice as the Next Great Magician.

“Learning magic is like learning an instrument,” said Sam. “It is very difficult. Kayla is teaching us how to do the moves and is giving us some really helpful advice.”

The production by playwright Crystal Skillman has earned a feature in Broadway World, a news outlet for the theater industry.

"It's also impossible to talk about this show without looking at the global pandemic,” said Sam in a Broadway World article. “In my view, it has given us one of the most valuable gifts of all—time. Time and space to consider our lives and our relationships. To look at what was working for us, and what wasn't. This show is about the same thing. We move forward so quickly that we seldom stop to really consider our journey. There's magic in stopping and looking around."

OPEN is a magic act that reveals itself to be a resurrection, according to a press release. A woman called the Magician presents a myriad of tricks for viewers' entertainment, yet her performance seems to be attempting the impossible—to save the life of her partner, Jenny.

The play questions if viewers' faith in the Magician's illusions is enough to rewrite the past. The clock is ticking, the show must go on and, as impossible as it may seem, the Magician's act may be the last hope against a world filled with intolerance and hate.

Performances will be live-streamed in association with Mesquite Media at 8 p.m. Friday, Oct. 2, and Saturday, Oct. 3, and 2 p.m. Sunday, Oct. 4. Purchase a ticket for $6 at https://www.partyclawproductions.com/tickets.

“Accessibility in theater was a big issue before the COVID-19 pandemic,” said Sam. “You can be anywhere in the world, pay for a ticket and see the play from the comfort of your home. This is an unprecedented level of accessibility.”

Sam is a theater and entertainment arts major at NMU and is thankful for the support of faculty and staff in the department. Upon graduation, she aspires to pursue a directing career in New York City. Sam is an alumna of the National Theater Institute and has directed and assisted on productions with several groups across the Upper Peninsula. 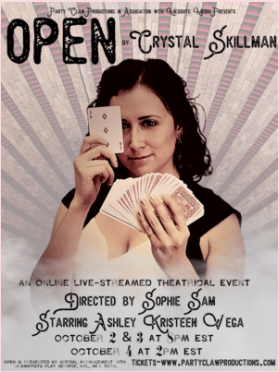