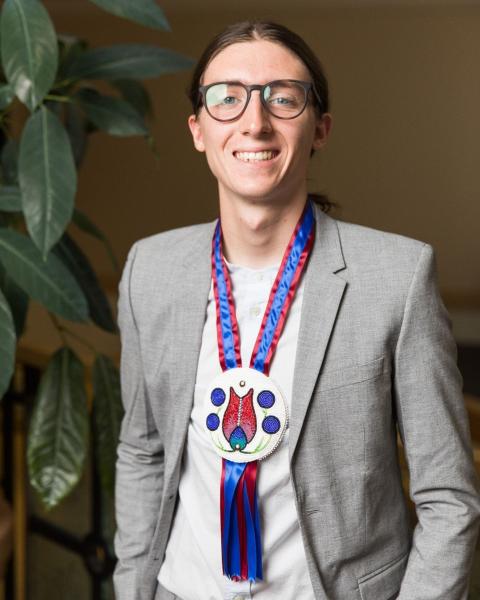 Northern Michigan University junior Bazile Panek will serve as the student keynote speaker at the third Shifting Seasons Summit hosted by the College of Menominee Nation—Sustainable Development Institute. He will present alongside three well-known Indigenous scholars and activists during the April 19-21 virtual summit, which promotes sharing adaptation and resilience knowledge across Indigenous communities.

“I will be speaking about how public participation was an integral part of environmental decision-making in pre-colonial and sometimes today's Indigenous communities,” Panek said. “Many of the environmental injustices like the Flint water crisis can be attributed in part to the lack of public participation. My speech will ask (and hopefully answer) this question: ‘How can we decolonize environmental decision-making in order to decrease injustices and increase the equity of voices represented?'

“The planning committee for this summit really wanted a youth voice to be involved, as youth are our future. I heard that my name was brought up a few times and the committee seemed excited for me to be involved.”

Panek is a Native American Studies major at NMU with minors in sustainability and entrepreneurship. He is a member of the Red Cliff Band of Lake Superior Chippewa, and was born and raised on the Red Cliff reservation in Bayfield, Wis. He serves on various ad hoc committees, in leadership positions on diversity, and has educated many people about Native American culture, language and history.

“Words can't explain how it felt to see my picture next to them," Panek said. "I'm awestruck that I get to be presenting alongside them. They're my superheroes; they're celebrities for me. I feel proud and excited to be able to present at this summit.”

The third installment of the Shifting Seasons Summit will be offered virtually. It is focused on tribal climate adaptation and implementation work throughout the Northeast and Midwest Regions. Find more information here.