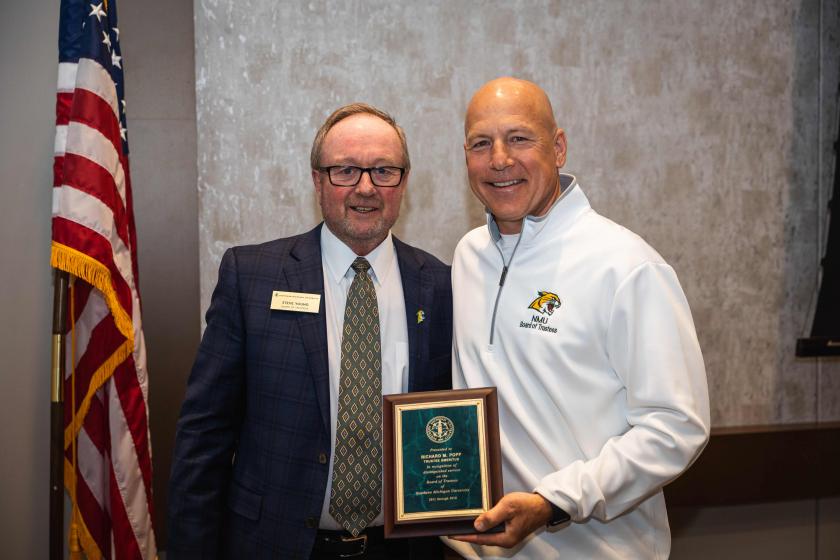 The Northern Michigan University Board of Trustees presented trustee emeritus plaques to Rick Popp and Thomas Zurbuchen in recognition of their distinguished service to NMU. The two men were honored at the board's April 29 meeting.

During his term on the board from 2011-2018, Popp served two terms as chair and one as vice chair. He also oversaw a presidential search. Popp's committee appointments with the board included Academic Affairs, Finance, Executive, and the Faculty Work Subcommittee, which he chaired at one point. He was an ex officio member of the NMU Foundation Board.

“Rick willingly shared his knowledge by offering wise advice and counsel, and there is no doubt he always has the best interests of Northern Michigan University at heart,” said NMU Board Chair Steve Young in presenting the trustee emeritus plaque. “I extend our heartfelt thanks for his outstanding service to Northern.”

Popp is also an NMU alumnus. He earned a bachelor's degree in computer science in 1988 and a master's in public administration (MPA) with an emphasis in personnel and labor relations in 1990. He maintains a connection to his alma mater as a longtime donor to the NMU Foundation. He continues to support the NMU Alumni Association, previously serving as chair of its board of directors, and gave a presentation at the university's UNITED Conference.

The former Wildcat football player also remains active with NMU Athletics, serving on the search committees for various coaching positions and as master of ceremonies for several Homecoming and NMU Sports Hall of Fame events.

When Zurbuchen was appointed as an NMU trustee by former Gov. Rick Snyder in 2013, he was a professor of space science and aerospace engineering at the University of Michigan and founding director of UM's Center for Entrepreneurship at the College of Engineering.

During his tenure on the NMU board, he was a two-time chair of the Academic Affairs Committee and member of the Executive Committee. He was elected vice chair before he stepped down in 2016—before his term expired—to accept a new position at NASA, where he serves as head of science.

“Thomas continues to support Northern as a donor to the NMU Foundation and as an advisor for science and entrepreneurship initiatives at the university,” Young said during the presentation.

Zurbuchen was selected to deliver the keynote address at NMU's April 30 commencement and to receive an honorary Doctor of Science degree.