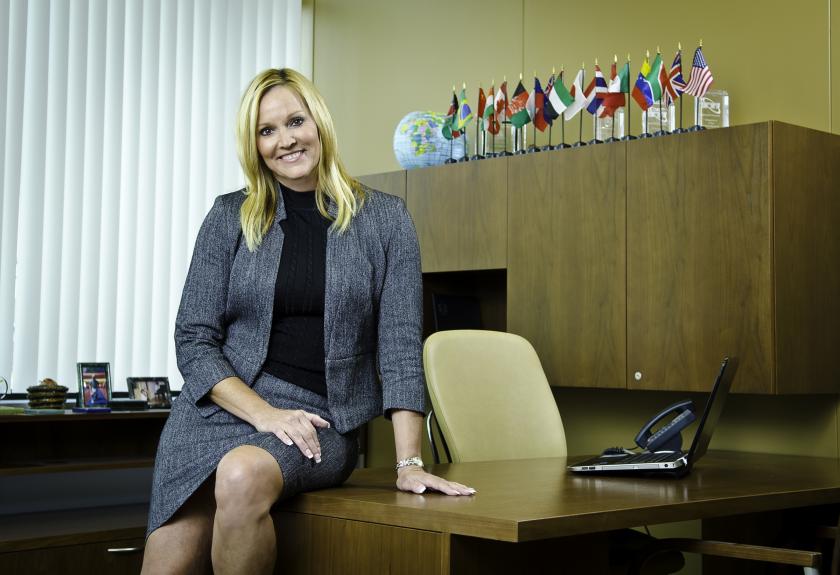 Lori Blaker, recently retired president/CEO of the Bloomfield Hills-based TTi Global and a longtime advocate of gender equality and women's empowerment in the workplace, will serve as the 2021 Executive in Residence for Northern Michigan University's College of Business Oct. 18-21. In addition to class presentations and meetings with student and faculty groups, she will deliver a free public presentation from 6:30-7:15 p.m. Thursday, Oct. 21, in the Northern Center Ballroom.

In 1979, Blaker began editing training manuals at her father's business, S&J Tech Data Service Company, which did technical writing for automotive companies. S&J later added a training subsidiary, Technical Training Inc. (TTi), to its portfolio and she became president in 1991. When TTi and S&J merged to form one company a few years later, she added CEO to her title.

Under Blaker's leadership, the services of what is now TTi Global were expanded to emphasize high-quality contract personnel and outsourcing, training systems design and e-learning. She also redefined the concept of "training services" by creating company-specific, Internet-based instructional programs.

As President/ CEO of TTi Global, Blaker oversaw operations on five continents with offices spanning the globe, from Australia, Brazil and Chile to South Africa, Thailand, the United Kingdom and Venezuela.

Blaker expanded TTi Global's role in emerging markets by building agreements among government, higher education and manufacturers to upgrade training programs, including successful workforce developments program in Mexico and India. In 2012, she was a part of the first ever US Department of Commerce trade mission to Afghanistan. She sold the business and retired at the end of 2020.

Her many travels abroad for work deepened Blaker's commitment to gender equality issues. She launched the Metro Detroit Chapter of the U.S. National Committee for UN Women in the fall of 2013 and served as its first president.

The chapter builds awareness of the UN Women efforts to eliminate discrimination against women and girls; empower women; and achieve equality between women and men as partners and beneficiaries of development, human rights, humanitarian action and peace and security. Blaker also is called to speak at many women's events nationwide and globally.

The NMU College of Business' annual Executive in Residence Program is designed to enrich student learning and faculty development by introducing accomplished leaders to the university community. Since the fall of 1979, it has brought to campus senior corporate executives and professionals, as well as successful entrepreneurs.