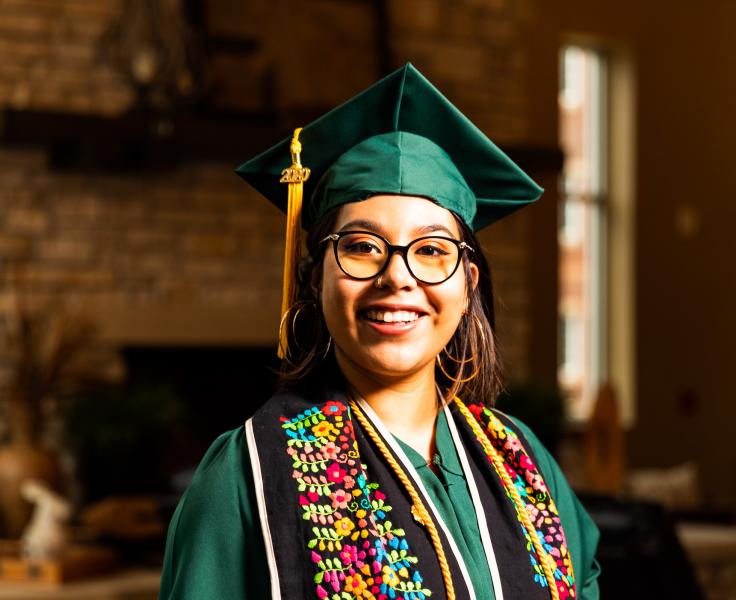 Cecilia Ruiz will be the student commencement speaker for the virtual Dec. 6 graduation recognition ceremony honoring all 2020 Northern Michigan University graduates. With the COVID-19 pandemic, NMU is offering one comprehensive celebration for May, August and December graduates. The ceremony will begin at 3 p.m.

“The general theme of my speech is that 2020 has been the most trying year of many people's lives,” said Ruiz. “As a class, we have managed to make it through those tough times, still managing to come out with our respective degrees—which was no easy feat.”

A native of Ludington, Mich., Ruiz entered NMU in 2016 as a first-generation college student and NMU Honors Program participant. In addition to academics, she came to train in the sport of weightlifting at the NMU U.S. Olympic Training Site.

Ruiz was accepted to the McNair Scholars Program in her sophomore year. She conducted research under the direction of Psychological Science Department Head and Professor Adam Prus. The subject of Ruiz's research was how to create medications for schizophrenia patients that do not have as many negative side effects as the current ones. Ruiz's research assessed the effects of chronic oxytocin dosage on spatial memories.

“My McNair research was an amazing, pivotal experience in that it taught me that while I could do scientific research and be quite successful, it was not what I wanted to do for the rest of my life. For about one year, I worked in my lab every single day, as I worked with live animals. It was the hardest work I have ever done—researchers are truly another breed.”

Ruiz presented her research at the University of Maryland, the University of California, Los Angeles and multiple times at NMU. In 2019, she was the overall winner and the People's Choice award winner of the McNair portion of the Three Minute Thesis competition.

“In the sixth grade, I decided that I needed to start looking into future career paths,” she said. “After a lot of research, I settled on the goal of being a neurosurgeon. We know more about the oceans than we do about our own brains. However, I was mostly drawn to it because at this time in my life a few of my family members died of strokes, other brain injuries and even Alzheimer's disease.

“When I asked the doctors why they were dying, the doctors replied that it was because they didn't know how to fix it. Personally, I didn't like that answer, so I decided that I would be the one to figure it out. So, I have been riding the same dream since the sixth grade and it has never faltered.”

Ruiz spent four years studying cellular molecular neuroscience, but switched to general biology with a mathematics minor because it allowed her to graduate sooner and gave her a full year to focus on the medical school application process. She graduated in May 2020 and has been living in Marquette and working retail while applying to medical school.

Though she retired as a competitive athlete due to injury, Ruiz said she continues to train daily and keeps in mind the many lessons about both lifting and life she learned from her coach, Vance Newgard.

For more information about NMU'S virtual commencement and to view the live event, visit https://nmu.edu/commencement/.