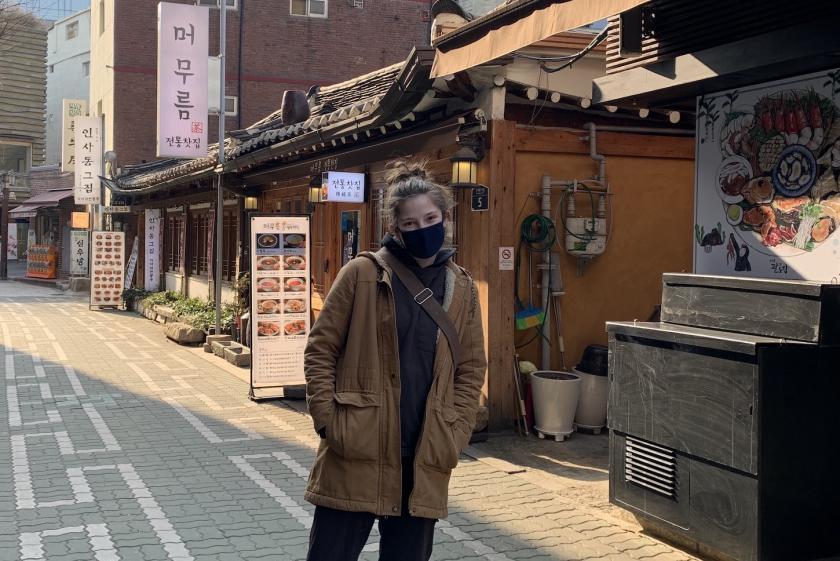 NMU student Maggie Compton of Marquette had already departed on a plane bound for South Korea in February when she received official notification that her study-abroad semester at Konkuk University in Seoul would be delayed by COVID-19. She decided to stay put and said she is happy with her choice, as the semester is now underway.

Some precautions were already in place in Seoul when Compton arrived, but through her first week there, cases started to rise substantially.

“It did not take long for the virus to become a national concern,” said Compton, a sophomore pre-law major. “While NMU offered to assist me in the financial burden of returning, I decided it was not the smart choice at that time, nor the choice I personally preferred. Returning to a country whose cases are on the rise without ample testing or resources seemed silly compared to staying in Korea, where cases are descending. Plus, Seoul is delightful.”

Recent statistics support her decision. While other countries' infection rates continue to spike, South Korea is one of only two nations to dramatically flatten the curve of new infections, according to a March 23 article in The New York Times. Compton said South Korea implemented many of the same precautions common in the United States.

“Further safeguards that I have not seen in the U.S. include public hand sanitizer stations at the entrances of most establishments, public temperature taking and widespread mask wearing,” she said. “We are not on any type of mandatory lockdown. Periodically, our temperature will be taken before being able to leave the dorm, but that's the extent of our confinement.”

Compton said masks are advised in public and required for those who ride the subway. She described the public's response to the pandemic as “considerably more pragmatic” than accounts she's seen from her home county, with no panic-fueled purchase runs on toilet paper and other items. She said citizens are taking the protective measures necessary and moving forward with their lives.

After a three-week delay, Compton began her study-abroad semester on March 16. Classes are scheduled to be offered online initially through March 30, before migrating to classroom instruction. She is scheduled to return to Marquette in early July.

While her social interactions in Seoul have been limited by COVID-19, Compton has had an opportunity to explore the city and cultural sites. She reports most tourist locations have been relatively empty, which is good for both social distancing and unobstructed views.

“I take whatever precautions are necessary to ensure those around me are still safe because it's a large city, with many people who want to keep working,” she said. “A couple of my friends have had their exchanges canceled and been sent home. Events that I was excited to attend here have been canceled as well. But comparatively, the virus has not had many major repercussions for me personally. My semester will still be completed.”