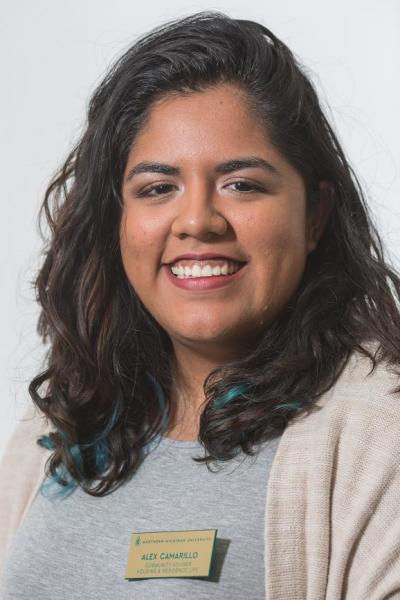 Alex Camarillo-Lugo of Lake Forest, Calif., will serve as the student speaker at Northern Michigan University’s spring commencement on Saturday, May 5. She will receive a bachelor’s degree in criminal justice and was named the department’s outstanding graduating senior.

Camarillo-Lugo is a first-generation college student. She chose to enroll at Northern because it offered a criminal justice degree and the NMU Regional Police Academy to match her career interests, along with relatively affordable out-of-state tuition. She also found the distance from southern California appealing.

“I love being challenged,” she said. “I knew if I went to college far away from my mom and my hometown, and to somewhere completely different from what I was used to, it would force me to teach myself how to adapt to new surroundings and experiences. I became homesick my first semester and was ready to return closer to home, but my mom said I made the choice and should stick it out. I’m really glad I did. Northern has been amazing and surreal.

“I owe a lot to the criminal justice professors. They’re very supportive, they’ve all had hands-on experience in the field and they create awesome opportunities for students outside the classroom. You just can’t find an experience like NMU anywhere else, from being so close to Lake Superior to being surrounded by genuinely nice people on campus and in the community. I’ve come to love the area so much that my dream is to return here after grad school and become a Michigan State Police trooper.”

Camarillo-Lugo has held various positions on campus. She worked for NMU Housing as both a resident and community adviser, and served on the staff development committee that planned the training and hiring. She also volunteered to talk with prospective criminal justice students at Wildcat Weekend events and assisted with the Young Wildcat Scholars camp, a taste-of-college experience for 6th graders from charter schools. Beyond NMU, she served as a counselor at Camp New Day, a week-long respite on Lake Michigamme for U.P. students 15 and younger who have an incarcerated parent or loved one.

Overcoming adversity will be the theme of her commencement speech. Camarillo-Lugo said her primary inspiration was a 40-year-old student and single mother who developed cancer after returning to school, but continued to press on.

“Whether it’s a health issue like that or students who change their major and have to stay here longer trying to find the best fit, I just want to remind them that they’ve overcome a lot to get to this point—their graduation—and deserve to enjoy the moment.”

Following commencement, Camarillo-Lugo will work as an assistant residence hall director at UW-Oshkosh while pursuing a master’s degree in public administration. She then plans to search for law enforcement career opportunities.

NMU's spring commencement can be viewed live on WNMU-TV 13 or online through a link at nmu.edu/commencement.