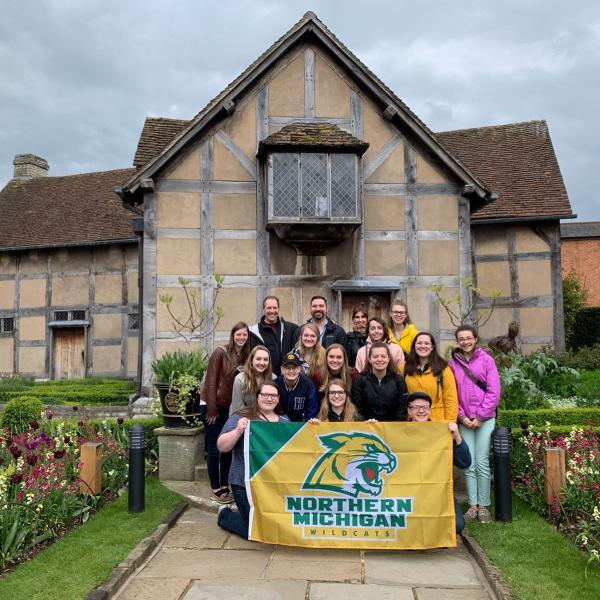 “This is was a project that had been in the works for a couple of years,” said Grundstrom. “The FRT Theatre and Dance faculty felt it was important for students to experience theater and dance performance and technology in other countries and in various venues.”

Highlights of the trip included seeing Pericles at the Globe Theatre, As You Like It at the Royal Shakespeare Theatre, the ballet Romeo & Juliet at the Royal Opera House, Little Death Club at the Underbelly Festival Southbank, a tour of London's West End theater district, Moulin Rouge and a can-can dance lesson and visits to the Palace of Versailles and Shakespeare's birthplace.

For NMU dance student Liz Caputo, this was her first experience traveling abroad.

“I decided to go on the London and Paris theater and dance study abroad trip because I wanted to get out of the country and see how people in different countries work on the arts,” said Caputo. “I wanted to learn how similar and how different we are. The main thing that I noticed was everyone we talked to is just as passionate about the arts in both London and Paris as we are in the United States.”

“Our instructor was very nice and really pushed us to do our best,” said Bowen. “I was pretty amazed with myself by the end of the two hours, as I never had kicked that high before nor have I ever done jazz splits.”

Grundstrom said the greatest success was that the NMU students, regardless of their theatrical or dance focus, were exposed to a full spectrum of experiences.

“It was made clear that to be involved in theater or dance does not mean you have to be on a proscenium stage; there are thousands of other ways to use artistic training and education,” she said. “It was also very important to us that the students experience cultures other than our own and experience life and the arts in countries other than the United States.”

The Forest Roberts Theatre and Dance program is slated to travel to New York City in May 2020 for a field studies experience and plans on heading abroad again in May 2021.