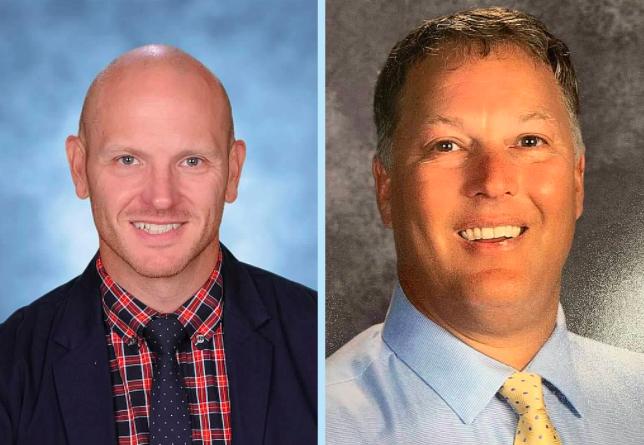 The award is presented to “an administrator, coach, official, trainer, doctor, or member of the media who has at least 15 years of experience in Michigan interscholastic athletics with unusually frequent and significant contributions to the MHSAA.”

Mattson and Wilson lead programs that frequently earn headlines for success in competition, according to an MHSAA story. The athletic directors are known in their local and statewide sports communities for the positive experiences they help provide students.

“Leaders among peers, ceaseless dedication, never saying ‘no' when needed—these are how this year's Bush Award honorees are described by their colleagues, and how we've come to know them as well,” said MHSAA Executive Director Mark Uyl. “What they give willingly for school sports goes far beyond awards they've received, and at the same time often receives little attention. We're delighted to recognize all of their continuing contributions.”

Mattson is in his 22nd year coaching, teaching or serving as an administrator in Michigan high schools. He serves as athletic director and assistant principal at Maple City Glen Lake. He previously served in the same role and others at Marquette Senior High School for 11 years and then as athletic director at Traverse City Central. He was an undergraduate men's basketball assistant coach at NMU. He also coached and taught in Rhinelander, Wis.

Mattson is a frequent MHSAA Tournament host and participated on sport committees for skiing, football, basketball, cross country and track and field, and has served as a regional representative for the Michigan Interscholastic Athletic Administrators Association (MIAAA) and as secretary for the Big North Conference. He received MIAAA regional Athletic Director of the Year awards in both 2008 and 2018, and was selected as the Upper Peninsula Athletic Director of the Year in 2006.

A current member of the MHSAA Representative Council—representing Class C and D schools in the northern Lower Peninsula—Mattson is a graduate of L'Anse High School and earned his bachelor's degree in marketing and master's in educational administration from NMU. While at NMU and into his tenure at Marquette, Mattson was a registered MHSAA official in football and basketball for a decade and briefly for softball and volleyball.

“Mark, having served his career in northern Michigan and the Upper Peninsula, always brings a unique perspective on how the largest schools survive in northern Michigan,” Uyl said. “Schools like Marquette and Traverse City Central face a unique challenge. He's always been an advocate for schools with those unique circumstances but also for all schools up north, and especially now as part of the Representative Council.”

A frequent host of MHSAA Tournament events, Wilson hosted more than 10 events during the 2019-20 school year alone and also has been on various MHSAA committees. He has served as president of the Big North Conference and provided his expertise to Little League and youth football boards. He was named his region's Athletic Director of the Year by the MIAAA in 2016.

“Christian has been a successful administrator for many years because of his outstanding temperament and the way he connects with people,” Uyl said. “He's someone who takes the work seriously, but never takes himself too seriously. He has served as a mentor to so many, and he's very gifted at building relationships. At the end of the day, that's what our business is about—those relationships.”

The MHSAA is a private, not-for-profit corporation of voluntary membership by more than 1,500 public and private senior high schools and junior high/middle schools which exists to develop common rules for athletic eligibility and competition.