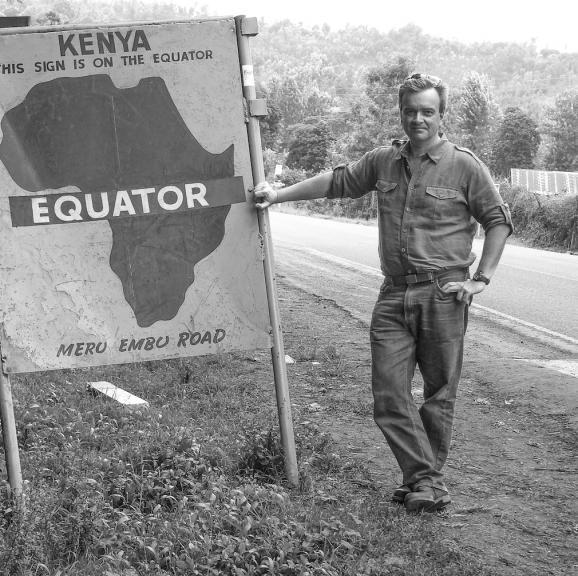 Warchol during a past research trip

Northern Michigan University Professor Greg Warchol is one of the world’s leading experts on the illegal wildlife trade. He was among the first to address the criminal justice aspects, from factors driving the multi-billion dollar international black market to organized crime’s involvement. Warchol recently published a book titled “Exploiting the Wilderness: An Analysis of Wildlife Crime.” He will give a presentation on the topic and display about 30 photos he took during several research trips to Africa from 6-7:30 p.m. Wednesday, Nov. 7, in the gallery area of NMU’s Olson Library.

The illegal wildlife trade is fueled by demand for products that are viewed as status symbols because of their rarity, offer purported medicinal benefits, or are coveted for their culinary or aesthetic value. Warchol said the level of crime fluctuates, but now appears to be on the upswing.

“A recent trend is a dramatic increase in rhino poaching in central Africa, where there has been government corruption and law enforcement breakdowns,” he said. “It’s being driven by organized crime in Vietnam. That country is still Communist, but it has introduced a market economy and become more prosperous. Having a rhino horn is a major status symbol in Vietnam.”

The southern white rhino population in South Africa had risen from 35 to 20,000 prior to becoming a renewed target. Simon Pillinger, one of the leaders of the restoration effort, is a retired provincial parks administrator and was instrumental in connecting Warchol to sources for his research.

Warchol said there is always a high demand for ivory because of its cultural significance. Nearly 90 elephant carcasses were discovered near a Botswana protected sanctuary in September by the conservation non-profit Elephants Without Borders. They had been killed and stripped of their tusks. Warchol said China, Hong Kong, Singapore and Japan represent the biggest markets for ivory.

There are efforts to use new technologies to reduce poaching, from drone aircraft to park rangers being required to wear GPS systems. Warchol said some of the systems employed by the U.S. Coast Guard to track smuggler boats coming into the United States are being used in southeast Asia to track wildlife crime. He said public awareness efforts featuring Asian celebrities has helped to curb consumer demand, and there are initiatives underway in Africa to educate the younger generation on the benefits of conservation.

“A portion of trade is internal, such as subsistence hunting,” Warchol said “For major species, along with certain marine life and birds, it goes through multiple layers. A local guy is hired as a poacher. He knows the area, who to talk to and who to bribe. Once he obtains rhino horns or songbirds, they go to a smuggler to get them out of the country. That’s where organized crime comes in, with connections at airports and shipping companies. Organized crime can be three people or a huge network.”

Most existing research on the illegal wildlife trade prior to Warchol’s involvement had focused primarily on the biological implications of species extinction and harm to habitats. His book, “Exploiting the Wilderness,” was one of the first to explore the criminology aspects, but others have followed as the field grows. Its seven chapters include an overview of wildlife trafficking, related conservation laws and agreements, the offenders/consumers, and future issues. 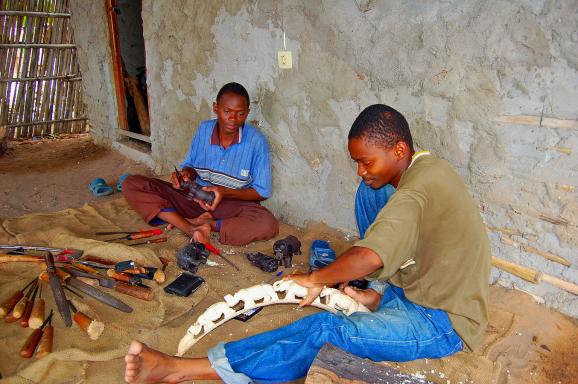 Ivory carvers display their pieces (this is one of 30 photos Warchol will display Nov. 7)
Prepared By