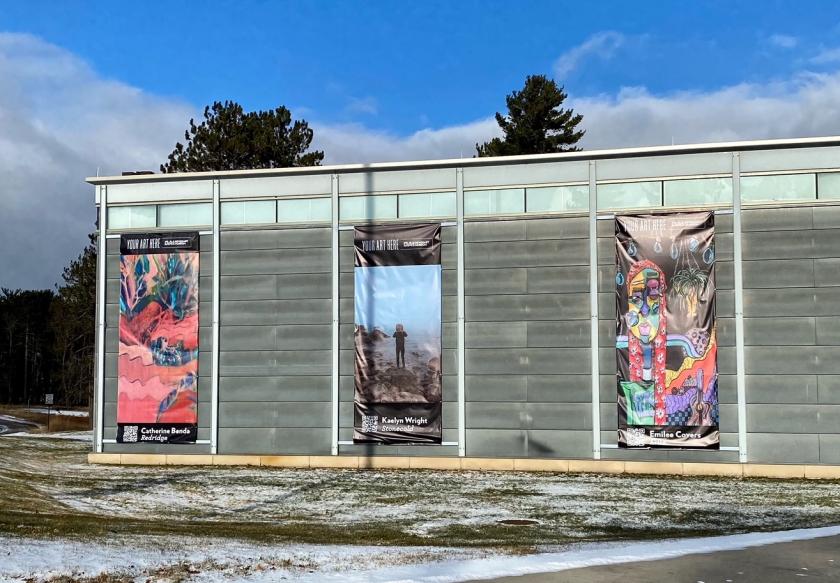 The winners' banners on display

Northern Michigan University's DeVos Art Museum has announced the winners of its "Your Art Here" competition: Marquette residents Catherine Benda, Kaelyn Wright and Emilee Covers. Their work is featured on three banners that have been installed in a prominent location outside of the museum.

The competition gave Upper Peninsula artists the opportunity to have their work displayed and receive a $250 cash prize. More than 50 submissions representing various media were received and the winners were selected by jurors Rachel Fugate, Melissa Matuscak and Whitney Warstler.

Benda grew up in Detroit and has a BFA in painting and drawing from Central Michigan University. She moved to Marquette after spending 40 years living in the Keweenaw on the shores of Lake Superior. Her work is influenced by nature, the landscape, the lake and the human connections to them. Benda's paintings and collaborative art projects have been on display regionally and nationally. In 2019, she earned the Bruce and Allie Kotila Award at the 32nd Northern National Exhibit sponsored by the Nicolet Art Gallery in Rhinelander, Wis., and a first-place award at the Northern Exposure Exhibit at the Bonifas Art Center in Escanaba.

Originally from lower Michigan, Wright moved to the area to pursue a bachelor's degree in cultural anthropology from NMU. Now a Marquette local, she works as the manager of Velodrome Coffee Company. Wright spends her free time outdoors, where she often finds inspiration, roping her friends into spontaneous photoshoots. Her work explores the solitary moments of limbo and empty places.

Covers is originally from a small Chicago suburb, but resides in Marquette while attending NMU. She is a junior in the graphic design concentration, but likes to dabble in several other mediums, including painting. Covers said she hopes to inspire other artists to venture into other mediums and expand their minds to find a new passion.