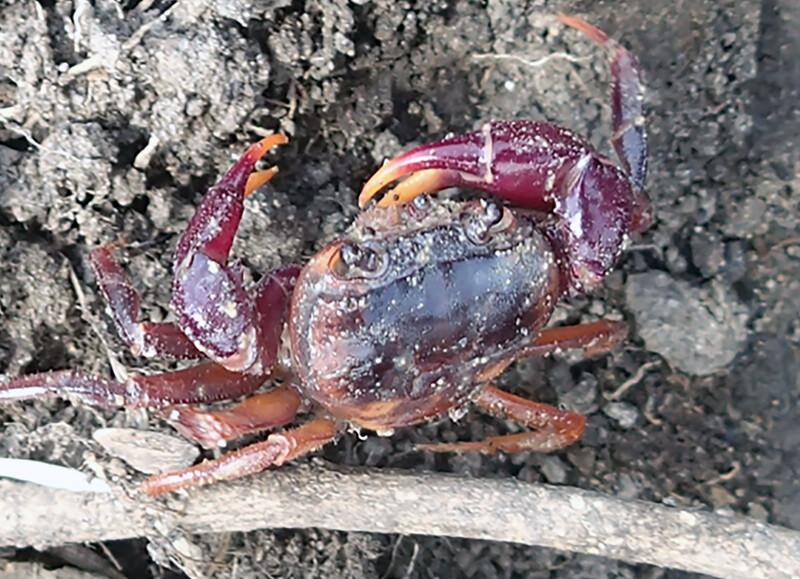 Northern Michigan University Biology Professor Neil Cumberlidge was among researchers who participated in a Sierra Leone expedition that led to the rediscovery of two land-dwelling, rainbow-hued crabs “lost to science” for many years. The work was supported by a grant from Re:wild, a conservation organization supported by actor Leonardo DiCaprio, which funded the trip in search of one of the “25 Most Wanted” species that are on the edge of extinction.

The Afzelius's Crab, with its purple body and orange legs, was discovered in Moyamba District forest. According to a Re: wild release, the species hadn't been sighted for 225 years, since 1796. The team later found six specimens of the Sierra Leone Crab, last spotted in 1955, at Sugar Loaf Mountain in Western Area National Park. Just like Afzelius's crabs, female Sierra Leone crabs have purplish bodies and orange claws, but the males have "pinkish-purple claws" and orange legs.

“We're optimistic that we found at least one healthy population of each lost species,” said Cumberlidge, who worked with Pierre Mvogo Ndongo of the University of Douala in Cameroon on the expedition. “Now we have to gather more information about the species' ecology, population size and behavior. We plan to follow this expedition up with on-the-ground conservation of these threatened species.

“These forests are under immediate threat through deforestation, at large and small scales, ultimately driven by the expanding human population in West Africa,” Cumberlidge said in a Mongabay story. “Even the Western Area Peninsula National Park where the Sierra Leone crab was rediscovered is not as protected as it should be.”

African land crabs are "unique" and only five such species are known to exist. They live in burrows on the floor of rainforests far from water sources and may even climb trees. And unlike water-dwelling crabs, land crabs are often more colorful.

Cumberlidge said he initiated the project and has remain involved ever since. He wrote the original grant for the two of them to travel to Sierra Leone, but Cumberlidge was unable to make the trip to Africa earlier this year because of COVID-19. Mvogo Ndongo carried out the survey in the rainforests. Through a combination of hard work and luck, both species were discovered in the course of three weeks of intense searching in difficult to access parts of the forest.

“All of the crabs he collected were photographed and emailed to me for identification,” he said. “Then I would tell him where to look next. This is how we worked it for the three weeks he was in the field. Then we both wrote the expedition report. We are working on a joint paper describing our new discoveries. We also found two other new species that need to be written up. When possible, we will meet in Berlin, Germany, to complete all of this.”

Cumberlidge is a pre-eminent African freshwater crab expert who has described 14 new genera and identified more than 67 new species.