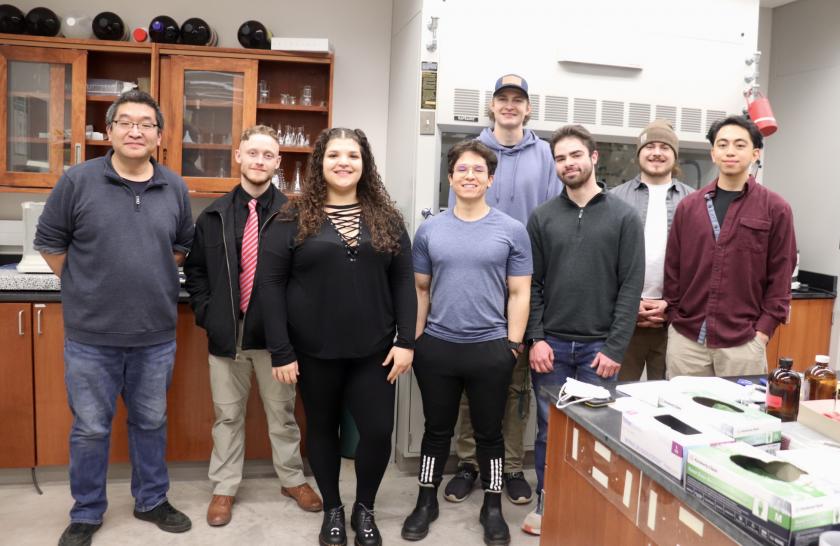 Northern Michigan University undergraduate students are participating in cutting-edge chemistry research with Professor Yu "Leo" Liu, who is among 14 faculty members nationwide recently awarded two-year summer research grants from Organic Synthesis Inc. His project advances “green chemistry” by eliminating the use of metal-based catalysts. Instead of organic solvents, it carries the catalytic reactions in a more environmentally friendly solvent: water.

The $8,000 per year in funding will cover stipends for two student coworkers and project materials and supplies.

The 2021 Nobel Prize in chemistry was awarded for the discovery of asymmetric organocatalysts: small, organic molecule-based catalysts that are cheaper than enzymes and friendlier to the environment than the traditional metal catalysts. Asymmetric organocatalysts, which can selectively produce the desired geometry of pharmaceutical molecules, has become one of the “hot research topics” in chemistry, Liu said.

Liu has contributed to the field by developing a unique system for assembling two different organocatalysts together through a special intermolecular force called aromatic donor-acceptor interaction.

“The two organocatalysts perform the reaction in a synergetic way, which significantly promotes the reaction rate and the selectivity of one of the mirror images of the targeting molecules,” Liu said. “More interesting, we found that water as the solvent can give the best results for this dual organocatalyst system. The common organic reactions require volatile and hazardous organic solvents, which create more environmental challenges. This finding is in line with the development of green chemistry.”

The undergraduate students who have participated in the research include: Garrett Meso, who initiated the project with Liu three years ago, earned his degree and is now a graduate student in mathematics; Sam Smith and David Gregorich, both scheduled to graduate this spring; Ender Harris; Derek Baluyut; Natalia Correa; and Jacob Cortez.

“This research is really valuable because we get access to doing different things that we can't do through our regular classwork,” Correa said. “This is helping to pave my path for graduate research and what I'm going to do in the future. I might synthesize some medicine. I'm still trying to figure that out, but he's a great instructor and it's an honor to work on this project.”

“This experience is helping me because it gave me an idea for the medicinal plant chemistry program. I want to develop a project by using the knowledge of supramolecular catalysts we are learning in this lab,” said Cortez.

The title of Liu's grant-funded project is "Organocatalytic Assembly Based on Aromatic Donor-acceptor Interaction for the Asymmetric Aldol Reaction." He will present his work at the National Organic Symposium in San Diego at the end of June. A peer-reviewed journal article about his research will be published afterward.