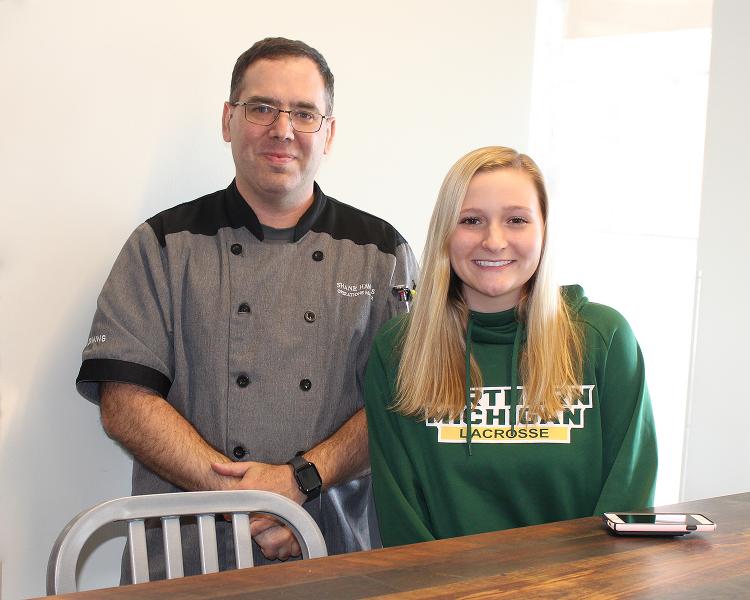 First-year nursing student Tess Kostelec said she is leaning toward a career in an emergency room because the fast pace, high drama and need to think quickly appeal to her. She recently found herself in a situation that involved all of those elements when she saved a student from choking at Northern Lights Dining. Her capable response impressed a staff member and reassured Kostelec that she could indeed thrive professionally in an ER.

Kostelec was eating dinner with friends when she heard a student urge someone to go get help.

“I walked over and asked the victim if she could breathe and she nodded no,” she said. “I told her I was going to get behind her and do the Heimlich. I gave her three blows and some of the burger came up. She and her friends thanked me profusely afterward. I wandered back to my table and had a crazy adrenalin rush. It's the first time I've saved someone. For a quick second, I was nervous I wouldn't do it right, but then I realized trying is better than no one helping her at all. My nursing instructors are amazing and always emphasize that whatever you're thinking of doing, you're doing it out of a good place and you don't willingly want to harm someone. So I just acted in the moment the best way I knew how.”

Shane Hawkins, operations manager at Northern Lights, was summoned to help. He arrived just as Kostelec was able to dislodge the burger. After ensuring that the victim was okay, he turned his attention to Tess, stressing that self-care is important after high-adrenaline experiences.

“I recommended that she do something unrelated to class or work,” Hawkins said. “Perhaps read a book that's not associated with school, listen to music or do a physical workout because that energy is so toxic. Many people seek comfort in sweets, cigarettes or alcohol after a stressful moment, but those aren't helpful. I also talked with the victim and her friends about the chair method [thrusting your abdomen against the back of a chair] in case they're around someone choking in the future.”

A native of Columbia, Md., Kostelec was recruited to play lacrosse at NMU. She was impressed with the nursing program tour during a campus visit and decided to follow in her mother's footsteps.

“She's a nurse and worked at Johns Hopkins Hospital with Ben Carson for a while. I'm convinced this is the right major for me and I love it so much. I geek out over medical science and innovations in the medical field. We're in nursing homes this semester. With every week that passes, I'm learning more skills and gaining more confidence. Even with basic things like bed baths, I know I'm making a difference in someone's life and I can be proud of that.”

Kostelec is also involved in the NMU Student Nurses Association.