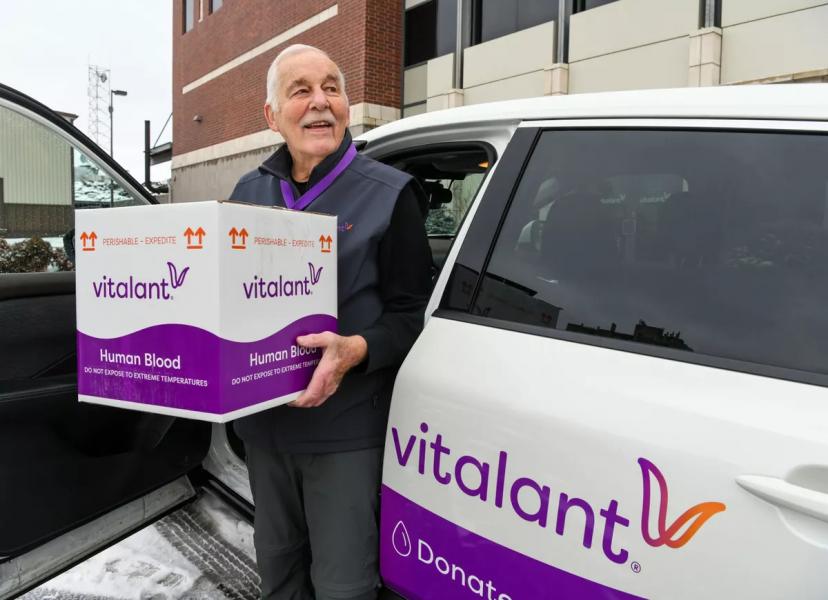 Northern Michigan University alumnus and former Wildcat football player Jim Mansfield has found retirement fulfillment in his role as a volunteer blood courier in Spokane, Wash. The 84-year-old loves to drive and it shows. Mansfield has logged more than 256,000 road miles delivering life-saving blood to rural hospitals over two decades of volunteer service.

“What I find most amazing about working with blood is that there is no discrimination,” he said in a Spokesman-Review feature story. “It doesn't care who you are, what your age is, what your color is or ethnicity is, or religion. Everybody uses blood. To me, that is so satisfying to help so many people. Everybody who needs it, actually.”

Mansfield received a bachelor's degree from Northern in 1961 and his master's in 1964. He was a four-year defensive tackle on the football team. He also married a fellow Wildcat: 1960 NMU grad and Marquette native Charlotte Brainerd Mansfield. They've been married about 62 years and have four children and seven grandchildren.

For the bulk of Jim's 38-year career in higher education, the couple lived in Spokane, where he served as dean of admissions at Gonzaga University from 1969-87. They later returned to the city after Jim retired from the University of Wyoming as director of admission and enrollment management.

Mansfield did not have to search hard or long for a post-retirement volunteer opportunity; it found him through an interaction with an electrician doing wiring on his home. According to the Spokesman-Review story, the electrician mentioned that he was serving as a blood courier in his free time and volunteered to take Mansfield on a run to hospitals.

“The rest was history,” said Mansfield, who can't donate blood himself because of blood-thinning medication he's prescribed, but wanted to help in some way. He plans to drive for Spokane blood center Vitalant for as long as he can.

“I guess until they take my keys away,” he said. “I have a couple of goals in mind, one might be to hit say 300,000, but we'll see how that works. Right now, the good Lord has given me the ability to do what I can do. It's in his hands.”