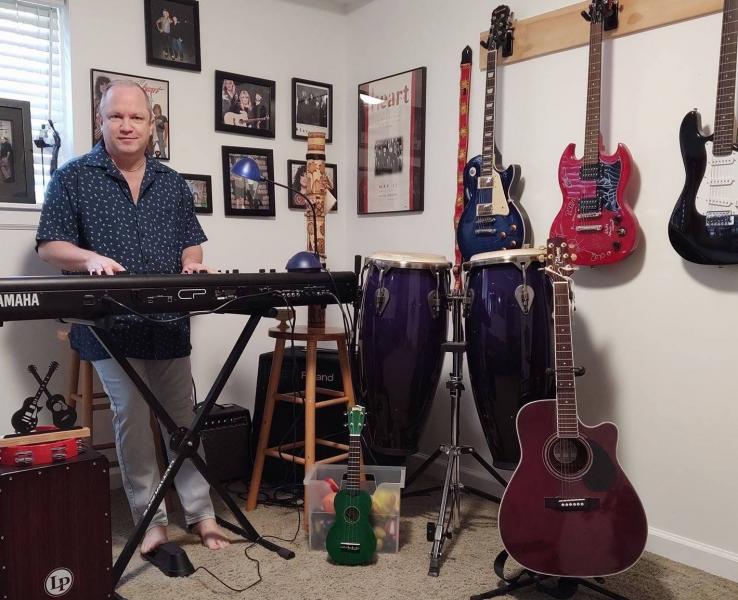 It began with an isolated request months ago, but has expanded into a meaningful mission during the COVID-19 pandemic. On most days since the “stay home” order was implemented, recently retired music teacher and NMU alumnus Chris Charboneau ('93) has posted a video of himself playing a different song on the piano—and frequently singing along—for his Facebook friends. The activity gives him a sense of purpose and allows him to channel his creativity in a way that boosts others' spirits during socially isolated, uncertain times.

An NMU friend told Charboneau that she missed his piano playing, and urged him to post a video. After several requests, he finally followed through on March 8 with Angela, the theme song from the former TV sitcom, Taxi. Fueled by the resulting positive feedback, he followed that up with medleys of Journey and Styx songs.

“The first several were just me playing the piano; I started singing after that,” Charboneau said. “Once the coronavirus forced us all to stay at home, my friends were commenting on how the videos had become such an important part of their daily routine. So I decided that I would do a video each day, since they were so well received. Whether a person is a musician or not, I have always believed that music truly is the universal language. It helps to bring out emotions in all of us, and certain songs are very special to each of us.

“I dedicate songs when I am playing one that someone requested, or when I think of people who the song will be special to. I have about 15 requests to get to. I had a friend from high school who lost his father a few weeks back. He asked me to play a song that was his dad's favorite. I found the music, learned it and recorded it for him. I posted it only to his page so that all of this family and friends could see it. It was a great feeling to be able to provide him and his family some comfort.”

Charboneau said he has tried to be versatile in his daily song choice. He also attempts to show something in each video that relates to the selection. That can range from an album cover or photo to a relevant T-shirt he wears while performing.

For a three-song medley from the movie Top Gun, Charboneau wore a Maverick costume and joked that he looked just like Tom Cruise. He also “dressed like a hippie” and played the guitar as he sang A Horse With No Name by America while strolling through his backyard. He said he changed the lyrics at the end of the song to reflect the ongoing COVID-19 crisis.

Charboneau studied both piano and percussion at NMU, and continues to serve his alma mater as a member of the NMU Alumni Association Board of Directors. In response to a recent request from Board President Jan Haapala, who was celebrating his 40th birthday, Charboneau did a special arrangement of The Middle by Jimmy Eat World, wearing NMU apparel and displaying NMU memorabilia. Watch it here.

Since retiring in 2019, Charboneau has taught part time at a music studio in Troy, near his residence in Madison Heights. His 26-year career in music education began as director of bands in Harrison Community Schools in Michigan, where he turned a 32-member high school band into a 110-piece group in five years. He also taught in the Birmingham Public Schools and Oak Park Public Schools. Charboneau spent his last eight years as the music director/director of bands at the University of Detroit Jesuit High School and Academy.

After recording his 50th Facebook video, Charboneau took a short break and has returned to posting every other day. A recent post included two songs: What a Wonderful World and a bit of Hallelujah.

“It has gotten a lot of love, because I truly believe that people are looking for positive things right now in their lives. Those lyrics are very beautiful and poignant right now. And as much as my friends are enjoying these, I think I love their feedback even more. It makes me feel great to know that I am providing a few smiles to a few friends.

Charboneau has been making most of my music videos public so they can be shared.

“With that said, any Wildcat is a friend of mine. So if there are any folks out there who want to see the videos, they can easily find me on Facebook. I will accept friend requests from anyone in the NMU community.” 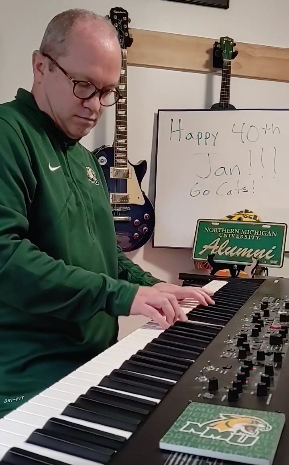 In NMU apparel for the birthday song requested by Alumni Association Board President Jan Haapala.
Prepared By