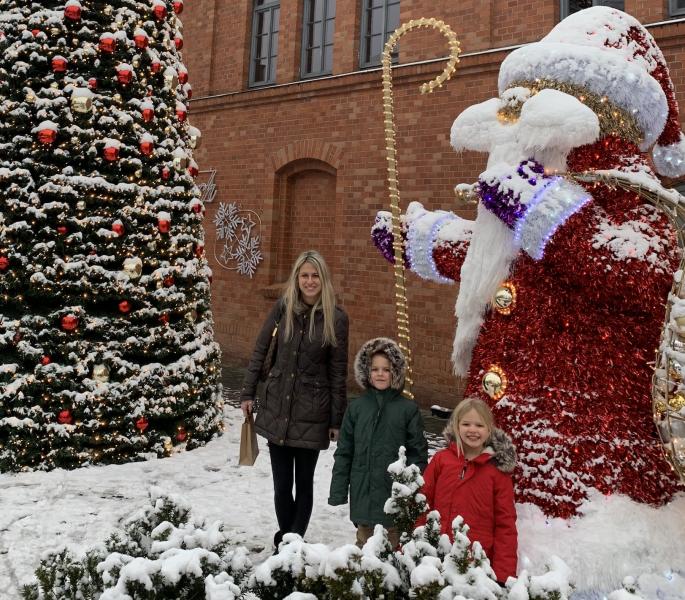 Kusek with her children in Poznan, Poland this past December.

Northern Michigan University associate professor Weronika Kusek is actively monitoring the situation in Ukraine. Her interest is partly professional because she addresses the topic of refugees in her human and population geography courses. It is also personal, as recent Russian missile strikes hit perilously close to the border of her home country of Poland, where her entire family still resides.

Kusek was born and raised in Poznan in western Poland. Because it is distanced from the military action, her family has not experienced direct consequences of the invasion. They are helping to collect supplies for incoming refugees. Kusek said about 1.7 million Ukrainians have crossed the border with Poland; more are expected.

“The aggression and destruction in Ukraine are distressful,” she said. “Just two weeks ago, many of these people had a good standard of living back in Ukraine, a country that has been building its democracy and modern infrastructure for three decades on a fairly steady course to true independence. Now all that hard work and progress is gone, just like that, because one man—Putin—decided to invade and destroy everything that these people had been building for three decades.

“The number of women and children arriving in Poland with nothing but a suitcase is heartbreaking. I am happy to see that Polish people have passed the exam for compassion and fundamental human decency.There are literally people at train stations who bring food, toys, and clothes to the refugees who arrive by trains. Many Poles—rich or poor, urban or rural—are opening their homes and hosting Ukrainian refugees. I feel very sad for the women and children who left their husbands and fathers behind. Many of them will never see their loved ones again, through no fault or choice of their own.”

As a geographer who studies migration, Kusek said she realizes the governmental and grassroots assistance must be long-term and significant. She also recognizes that tensions between locals and refugees are likely to arise at a certain point. Her hope is that the European Union will relieve some of the influx pressure on Poland by helping to relocate some of the refugees so they have a chance to build a new life in a peaceful place.

Kusek said Poles are balancing the historical recognition of the threat coming from authoritarians in Russia with some sense of security in the fact that 2022 Poland is a significant departure from 1939 Poland. Her generation grew up surrounded by grandparents who survived WWII, communism, transformation to democracy, and accession to NATO and the European Union. They now wonder if Putin will attack Poland next.

“Poles are trying to stay positive, but despite our confidence as members of NATO and the EU, we simply don't know,” Kusek said. “Many people are preparing emergency plans in case they have to leave their homes. Most of my family members and friends have their passports, birth certificates and cash ready in case they have to leave for a western country. Many people are exchanging the Polish currency to the U.S. dollar to protect their life savings. They just saw how the Ukrainian currency tanked and they want to be prepared.”

Kusek said Poland and Ukraine have had a long history—some of it not good—but this crisis seems to have motivated Poles to help Ukrainians through their shared experience of trauma caused by war and mutual respect for self-determination and independence.

Just before Putin invaded Ukraine, Kusek submitted an article for publication about how Poland has become a hub for immigrants from other countries. Ukrainians represented the largest immigrant group in Poland, even before the influx of refugees. Most arrived as economic/labor migrants, and many settled in her hometown of Poznan. Her family members work with and employ Ukrainian migrants, some of whom have returned to their former country to support the fight.

“Ukrainians have become an integral part of Polish society and the workforce, and in many cases friends, spouses or family,” Kusek said. “The Polish economy would not be able to develop at the current pace without the Ukrainian workforce. Overall, the attitude toward this immigrant group is generally very favorable. Polish people appreciate the Ukrainians' work ethic and professional skills. Because Ukrainians are culturally and linguistically similar to Poles, the process of their assimilation to the Polish society is very seamless.”

Kusek is in daily communication with her family and follows the news on a daily basis. In addition to her continuing concerns for Ukrainian refugees and Poland's future, she also thinks of Russian citizens—particularly those who don't support the war—who have been adversely impacted by Putin's invasion and the resulting economic sanctions. Kusek said there are many victims associated with the military assault and its repercussions.