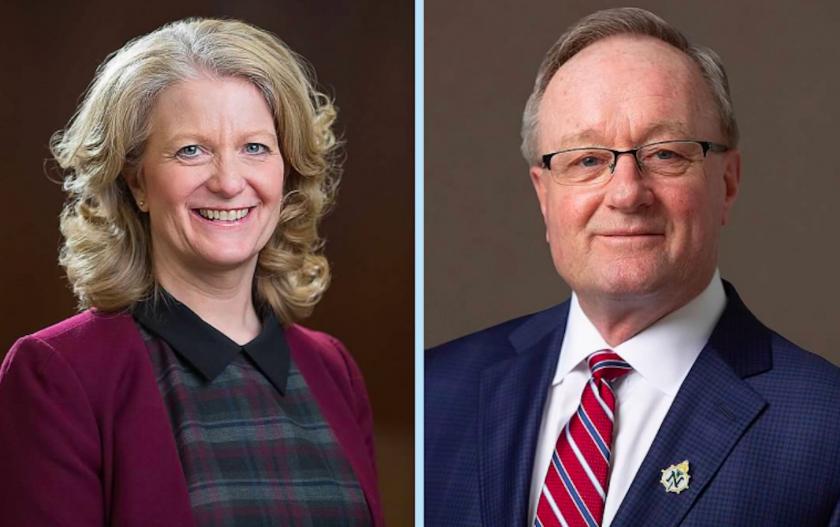 Tami Seavoy of Marquette will serve as chair of the Northern Michigan University Board of Trustees for calendar year 2021. Steve Young of Lansing will be vice chair. The board held elections for the leadership positions at its Dec. 11 meeting.

Seavoy is an attorney with the Marquette firm of Kendricks, Bordeau, Keefe, Seavoy & Larsen, P.C. She is a member of the Michigan Bar Association, Marquette County Bar Association and the American Health Lawyers Association. She has been a mentor for NMU's Student Leader Fellowship Program since its inception.

Her community service includes serving on the boards of UP Health System-Marquette and Bay Cliff Health Camp. She is also a volunteer librarian for Father Marquette Catholic School. Seavoy earned her bachelor's and law degrees from the University of Michigan.

“I look forward to working with President Erickson, Vice Chair Young and the entire board on the many initiatives Northern Michigan University has on its horizon,” said Seavoy, whose term on the board expires Dec. 31, 2022.

Young recently retired as owner and officer of the Lansing-based Governmental Consultant Services Inc. The top-rated lobby firm is one of the biggest in the state and represents more than 120 clients. He was voted the most effective lobbyist in Lansing for several years running. He previously served as a manager of tax and regulatory affairs for the Michigan Chamber of Commerce.

Young was a political science major and Payne Hall resident at NMU in the mid-1970s. He left NMU to work at the state capitol as chief of staff to a state senator from the Saginaw area. Young completed his bachelor's degree in political science and economics from Michigan State University. He lives in Lansing with his wife, Tricia, and has two daughters, Jennifer and Stephanie. His term on the board expires Dec. 31, 2026.

The board recognized outgoing chair and 1967 NMU alumnus Steve Mitchell of West Bloomfield and trustee James Haveman of Grand Rapids. Both of their terms on the university's eight-member governing board expire Dec. 31. Trustees also honored former Michigan lawmaker Tom Casperson, who passed away last month. Casperson represented the 38th district in the Michigan State Senate and the 108th district in Michigan's House of Representatives.

In other action at today's meeting, trustees:

- Approved an amendment to the purchasing policy that recognizes NMU's commitment to the practice of including Upper Peninsula vendors and suppliers in its solicitation for services, when feasible. NMU will annually communicate public recognition that clearly demonstrates the university's ongoing commitment to the economic success and vitality of the U.P. region.

-Agreed to change the name of the current NMU Multicultural Education and Resource Center to the NMU Student Equity and Engagement Center. The new name better reflects the revised mission and activities designed to further promote equity, inclusion and social justice.

-Approved the rental agreements between NMU and the State of Michigan, Department of Technology, Management, and Budget, for the Department of Attorney General, from June 1, 2020 through May 31, 2022. The space is located in Suites 1201 and 1202 of the Northern Center.

-Agreed to give NMU's vice president for Finance and Administration the authorization to negotiate potential leases for commercial properties located in the downtown Marquette area.