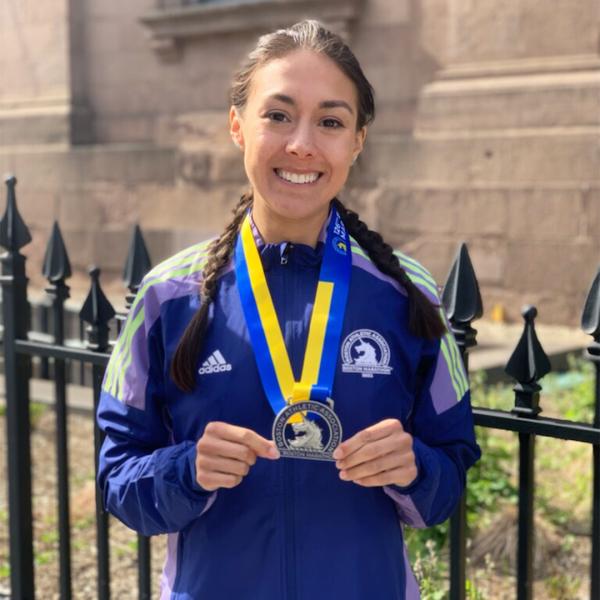 Northern Michigan University alumna Shayla Manitowabi-Huebner, who ran her first Boston Marathon on Monday as a member of the Native Women Running group, was featured in media coverage around the event of efforts to increase representation of Indigenous women in the running community by encouraging and featuring their involvement. The 2019 NMU sports science graduate “crushed” the race, as one article stated, with a finish time of 3:25:25 after only two months of serious training.

“I was blessed to run on the Native Women Running team for the Boston Marathon,” she wrote on LinkedIn. “I ran in prayer for healing. I carried the medicine, kept my spirit and thoughts good, represented my truth and courage, and ended up finishing with a Boston qualifying time [meaning she can return to run next year's race if she chooses].”

“Shayla was a very successful athlete on my cross country and track & field teams here at NMU. I was in touch with her before and after the race,” said NMU Head Coach Jenny Ryan, who coached both Manitowabi-Huebner and fellow first-time Boston Marathoner Kieran (Becker) Vonkronenberger, a 2018 communication studies grad who finished in 4:35:46.

Manitowabi-Huebner is Anishinaabe (Odawa) and a citizen of Wiikwemkoong Unceded Territory on Manitoulin Island. She has been running since sixth grade and reported being the sole Indigenous competitor in most of her races. She said it has only been in the past couple of years that she has noticed a shift. Part of that is fueled by an increase in online stories posted by Native Women Running and other entities or individuals.

"I'm seeing it more online and that's okay because I still feel like there's a sense of community," she said in a CBC report. "It's like, oh, we all went on our run today, or this is what this person did on their own, or this is their reflections.”

In a Women's Running magazine story, she added that her “goal with all this is I want to inspire other people and inspire them to do things that are uncomfortable, or to reach their goals and, if applicable, to reconnect to their ancestry.”

Now that she is based in Utah, a long distance from her ancestral homelands, social media has also helped Manitowabi-Huebner sense the support and encouragement of her community, particularly as she prepared to compete in the Boston Marathon. She was among six women from different Indigenous cultures, families, clans and Nations representing Native Women Running and Wings of America in the event, according to the magazine story.

On a related note, Manitowabi-Huebner received a $10,000 2022 Dreamstarter grant for an Indigenous Health and Wellness Connections (IHAWC) project titled “Running Into Culture.” She said it will provide an opportunity for youth to experience personal and cultural growth. The overarching goal is to  reduce Native youth obesity, pre-diabetes and suicide rates, as well as increase mental wellbeing, self-identity and cultural connection.

Her Running Strong for American Indian Youth Dreamstarter bio stated that she will host workshops and running sessions open to all levels of ability including teachings on the history of running, culture, traditional food, physical exercise, nutrition, mental and spiritual health, and basic language. Each runner will also be provided with running shoes, T-shirts, socks and traditional foods as post-session snacks and the end of the program will include a 5K run/walk.

During her graduate studies at the University of Texas-Arlington, Manitowabi-Huebner developed culturally sensitive obesity interventions for Native youth in the Midwest with traditional dancing YouTube videos called “Powwow Sweat.”