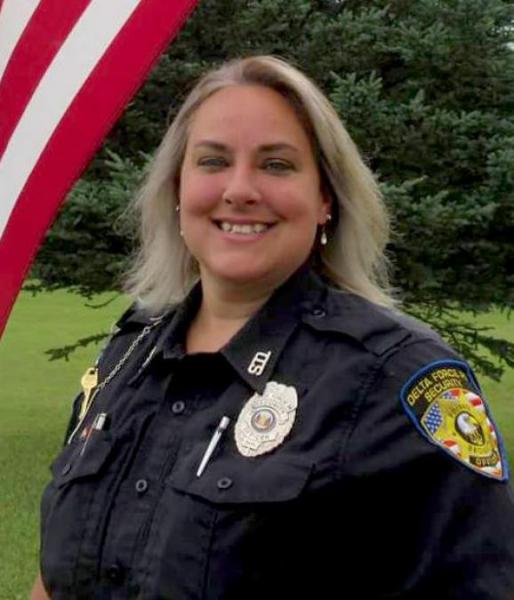 Kleiman in uniform as a security officer with Delta Force PI, LLC out of Escanaba

NMU alumna Tiffany Kleiman (’15 BS) will embark this fall on a doctoral program in criminal justice with a concentration in behavioral science at Nova Southeastern University in Fort Lauderdale, Fla. She recently recounted the value of her undergraduate experience and thanked faculty and staff who made “an imprint” on her life in an email to President Fritz Erickson and Provost Kerri Schuiling.

Kleiman enrolled at NMU in the fall of 2013—seven years after completing her second associate degree at Bay College. Despite the fact she was noticeably older than most students in her classes, she reported age never was an issue and that she felt welcomed across campus.

“Working at the HelpDesk with Chris Wagner sincerely assisted in making my transition easier and I wished I could have stayed on after graduation,” she wrote. “The HelpDesk employees were like a family and it was nice to have that since I was away from my husband and son during my time there. I cherish the friendships I made and continue many of them to this day, including Chris Danik, who is a Programmer/Analyst III in Cohodas Hall.”

With aspirations of becoming a criminal justice professor, Kleiman mentioned some of the faculty and courses that influenced her career choice.

“There were several classes that I thoroughly enjoyed, including Dr. McEvoy’s Sociology of Deviant Behavior, which was very informational and taught me that just because society believes something to be abnormal does not necessarily mean that it is. I was a teaching assistant for a special topics course taught by Dr. Michael Harrington called Women in Crime and was able to teach a few of the classes. I truly felt in my element in this class. A couple of the people that made a huge impact on my educational experience were Assistant Director of NMU Public Safety Jeff Mincheff and Dr. Gloria Urban. I wasn’t sure when I first came to NMU exactly what I wanted to do in the future, but because of their teachings, I finally figured out what path I would choose”

McEvoy and Mincheff wrote recommendations to Nova Southeastern University on Kleiman’s behalf, which she indicated gave her an edge over other applicants and paved the way for a successful interview. After NMU, she earned a master’s degree in criminal justice from Boston University. Kleiman chose a concentration in cybercrime investigation and cyber security, based on her NMU HelpDesk experience and previous ownership of a computer store.

“NMU was not just a stepping stone to achieve my dream,” she wrote. “I will always remember it as a place I gained a family and friends and learned so much to prepare me for the future.”