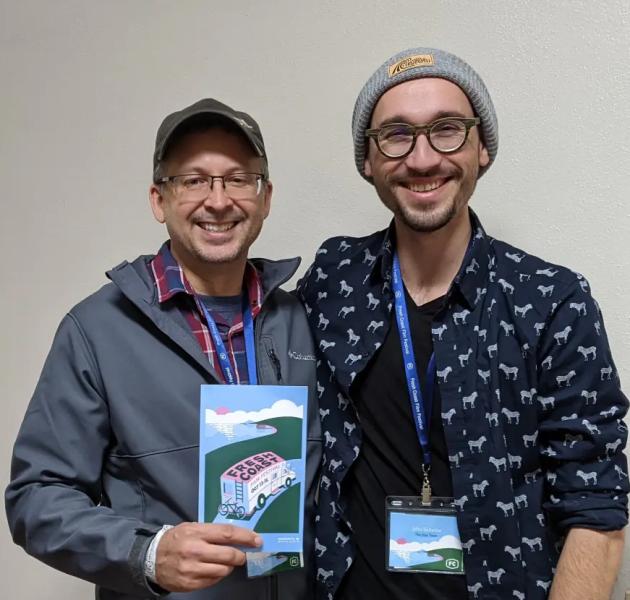 Korhonen (left) and Scheibe at the Fresh Coast Film Festival

Two Northern Michigan University alumni collaborated on a 20-minute independent documentary titled The Iron Town, which delves into Negaunee's mining history, current issues, and the key role that outdoor recreation is playing in guiding the city's future. Both will discuss the making of the film, with a screening to follow, at 1 p.m. Saturday, Feb. 4, at the Michigan Iron Industry Museum. The project premiered at the 2022 Fresh Coast Film Festival.

For producer Dan Korhonen, the film allowed him to share the story of the town he was raised in while combining his interests in history and community development. For director and editor John Scheibe, who was living in Negaunee during production, it was an opportunity to use his new professional-grade equipment to complete his first project before announcing the launch of his Marquette-based filmmaking venture, The Yonder Studio.

Korhonen remembers hundreds of acres of land fenced off during his childhood due to concerns about the caving potential after the last operating underground iron mine, Mather B, closed in 1978. A once-thriving section of Negaunee had to be relocated.

“My dad was the Negaunee city manager at one time, and when he shifted to the same role in Ishpeming, he was involved when both cities purchased the caving grounds from the mining company,” Korhonen said. “I wanted to explore whether the recent progress in Negaunee can be directly attributed to that purchase and how they turned it into something useful: public park space for everyone to access. It's a universal model any small town can relate to when it's in that situation of having to diversify its economy to survive. Negaunee is embracing its mining heritage, but also trying to move away from it and increase outdoor recreational opportunities and related tourism.”

The 47-mile Iron Ore Heritage Trail (IOHT) lies at the heart of that effort. The multi-use pathway extends from Republic to the Ojibwe Casino off M-28. Because it crosses the Marquette Iron Range, remnants of the mining industry, along with related art pieces and interpretive signs, can be found sporadically along the route. Trails managed by the Range Area Mountain Bike Association (RAMBA) and a disc golf course also occupy former caving grounds space.

“When I happened to be living in Negaunee while we were filming the documentary, over the span of a year, three new businesses opened and I would often see Nate assertively pacing through the downtown,” Scheibe said. “Iron Street is changing, and you can see the groundwork being laid for Negaunee's future direction. It's a huge turning point, and the city's leadership is moving mountains with the things they're doing, like obtaining grants for the downtown streetscape.”

Scheibe grew up in Kingsford. His interest in filmmaking began with the advent of YouTube, where he would post short comedy videos with friends. He suspended his hobby while pursuing his 2015 bachelor's degree in theater and entertainment arts from NMU. After a professional stint in New York City, the pandemic motivated him to contemplate a return to filmmaking, but on a professional level. He was in the process of setting up a studio with the required equipment when Korhonen called about taking on The Iron Town. Scheibe just completed his second project, “Perhaps We Wrong Them,” a fictional cinematic short film that tells the story of an adult's lingering childhood trauma, expressed through dance.

“The filmmaking industry in the U.P. tends to be a giant celebration of our part of the state, with seasonal scenery and lots of outdoor activities depicted,” he said. “It's great to highlight that, but it would also be nice to see a parallel interest develop for more script-driven, fully produced cinematic short films that emphasize character development with actors and use the U.P. as a backdrop rather than the singular focus. I would love to see that.”

Korhonen earned his master's degree in training and development in 2006. He works full time as an electronics technician with the DNR's Marquette State Fish Hatchery and devotes much of his free to time to filmmaking. His next project is also community-oriented, focusing on how three U.P. theater organizations operate and survive: the Vista in Negaunee, which is trying to move forward from a roof collapse; the Keweenaw Storytelling Center, whose building in downtown Calumet also suffered a roof collapse; and the Masonic Arts, Theatre and Innovation Company (MATI) in Marquette.

“YouTube, Vimeo and other platforms have made it more accessible to do DIY productions with the equipment you have available, but there's a growing filmmaking infrastructure in this region,” said Korhonen, who hosted a panel of four U.P. outdoor adventure filmmakers for a Jan. 11 Connect Marquette event.

The original cut of The Iron Town was more than 40 minutes long, so it had to be cut it in half to meet the time-limit requirement for the Fresh Coast Film Festival. WNMU-TV offered to air it as part of the Fresh Coast Flashback series, but the filmmakers had to decline the opportunity because their music licensing did not extend to broadcast.

Korhonen and Scheibe said they might enter the documentary into other U.P. film festivals and possibly screen it at an outdoor summer event. The Negaunee school district has also expressed interest in interweaving the documentary into the curriculum. In the meantime, The Iron Town is also available for personal viewing at https://www.Vimeo.com/yndr/theirontown. 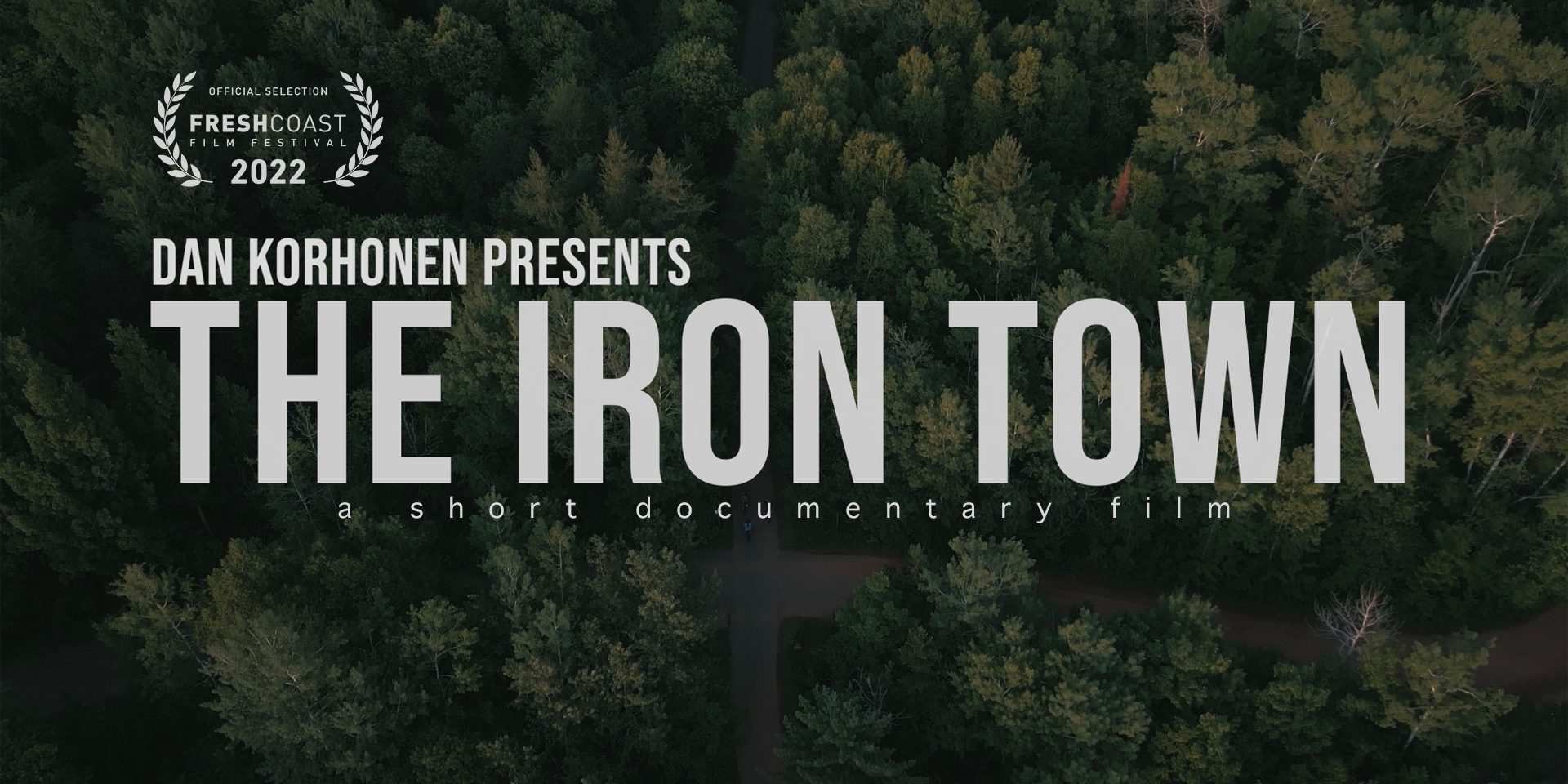 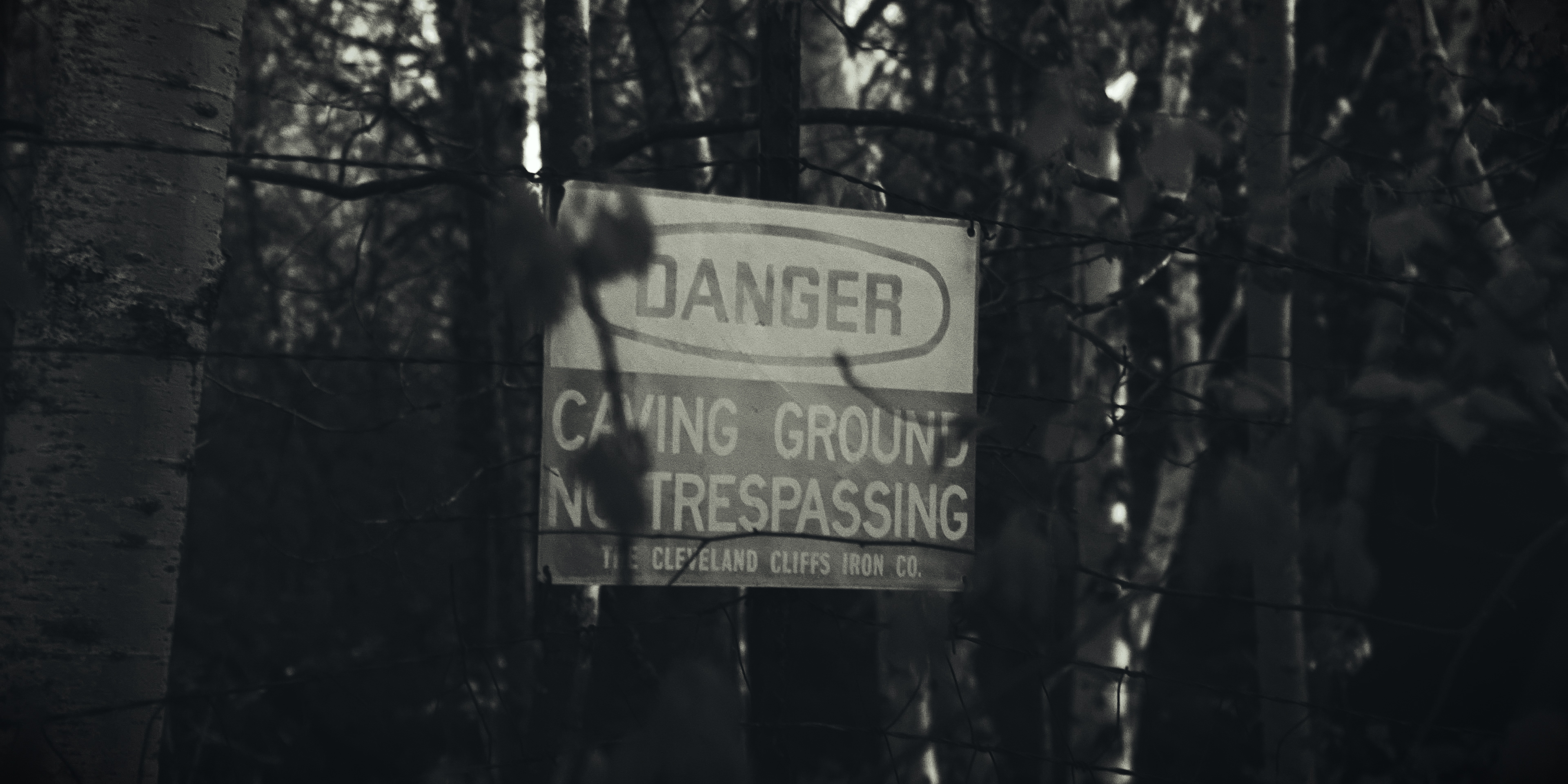 A warning sign posted at the caving grounds.
Prepared By